Euro Forecast: Euro May Have Room for Further Recovery in Short-term 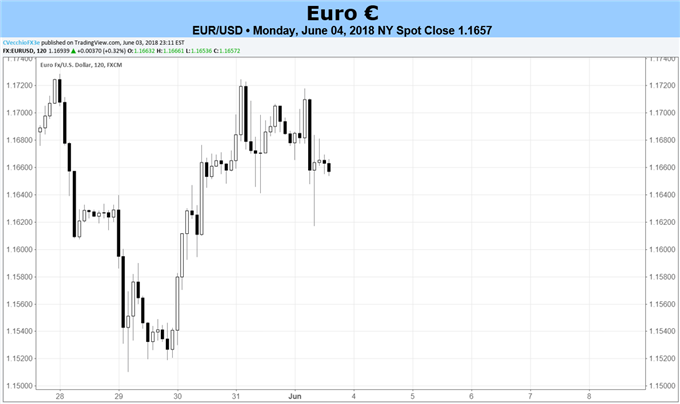 - The Euro had another tough week, losing ground against all but two major currencies. However, the Euro trade-weighted index was up for the first time in five weeks as the gains came against the Japanese Yen and US Dollar.

- Upcoming economic data will do little to change the conversation around the Euro; instead, external influences are likely to reign supreme.

- The IG Client Sentiment Index suggests a mixed outlook for EUR/USD after a sharp drop in retail trader net-long positioning over the past week.

The Euro dropped against five of the seven other major currencies last week, although a late-week rally across the Euro complex staved off what could have been a much worse performance. Driven by fears of what a messy political transition in Italy could result in, the Euro trade-weighted index dropped to its lowest level since last July before posting its first positive week since April 20.

But now that a populist, anti-establishment government has been sworn into power, investors will anxiously await to see what spending plans are unveiled. Ultimately, if steep deficit spending measures like a basic income are enacted by the new Italian government, the rating agencies could chime in and cut Italy’s already weak credit rating, which is only a few notches above ‘junk.’ If Greece, which accounts for 3% of Eurozone public debt, can cause the headaches that it has over the past decade, then Italy, which accounts for 23% of Eurozone public debt, could easily.

For now, there may be a brief reprieve for the Euro, even as the market participants have started to baton down the hatches (in some respects); Italian bond yields and CDS spreads have skyrocketed higher in recent weeks. But before any concrete actions are taken by the new Italian government, there may be a window for some other factors to hold sway over the Euro.

On the inflation front, the beat by the preliminary May German and Eurozone CPI reports last week comes alongside with rising Eurozone inflation expectations. The 5-year, 5-year inflation swap forwards closed last week at 1.730%, up from 1.690% on May 25. Concurrently, the Euro is becoming less of a headwind for inflation, now only up by +3.1% on a trade-weighted basis over the past year.

The improvement in the inflation picture in the near-term has helped stabilize economic data momentum overall. The Citi Economic Surprise Index for the Eurozone finished at -96.6 on May 4 and closed at the same level on May 25, but had risen slightly to -91.1 by June 1. There are few data due out in the coming days that will move the needle here, but attention here is on the April Eurozone Retail Sales report on Tuesday and the final Q1’18 Eurozone GDP report on Wednesday.

When looking outside of the Eurozone, external factors may be rearing their heads in a manner that keeps attention off of the Euro’s negative looming aspects in the near-term (mainly, the Italian government’s potential for fiscal calamity). Of note, the United States’ decision to levy tariffs against Canada, Mexico, and the EU should be at the center of attention in the days ahead, especially as more US tariffs (which are generally USD negative) are being considered against China.

Finally, there is no longer the significant net-long Euro position in the futures market as there was less than two months ago. Speculators held +93K contracts through the week ended May 29, a -39% decline from the all-time high set during the week ended April 17 (+151.5K contracts). Positioning should no longer be considered the significant negative factor it once was for the Euro, even if it hasn’t become a positive factor yet.