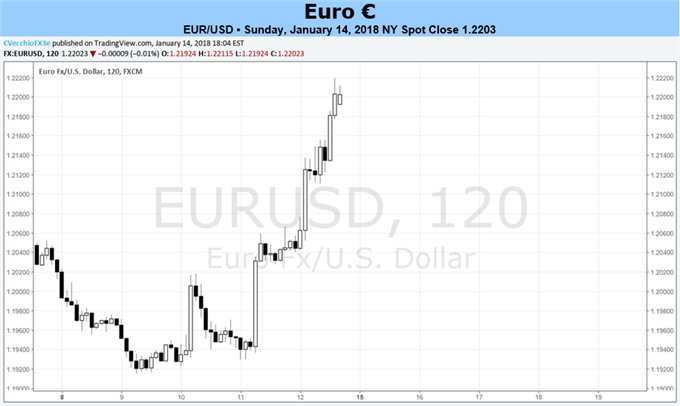 - The ongoing build up in net-long Euro positioning received a blessing from the ECB this week after the December meeting minutes hinted at a potentially faster than previously anticipated QE exit.

- If there’s anything that could derail the Euro right now it would be inflation data, of which we’ll get the final December (and thus, 2017) figures this week.

- The IG Client Sentiment Index has cooled on EUR/USD in the near-term.

The Euro was among the top performers last week, adding another +1.42% versus the US Dollar, with EUR/USD on its way to three-year highs. The big spark for the Euro rally came mid-week with the reveal of the European Central Bank’s December meeting minutes, whose underlying tone was more hawkish that anticipated. If a few things break right early on in 2018, the ECB has positioned itself as willing to withdraw stimulus faster than what is currently scheduled.

The subtle yet meaningful shift in the ECB’s tone would seem to hinge on economic data continue to point to accelerated rates of growth and higher inflation down the line. In general, economic data has been strong, with the Euro-Zone Citi Economic Surprise Index finishing Friday at +58.3, up from +46 the week prior. As noted last week, the decay over the past month appears to be a function of data rolling off the calendar and a lack of new releases at the end of December to replace them; now that data are being released again, the gauge is strengthening).

Likewise, recall that the final Euro-Zone Composite PMI reading for December showed that growth momentum in the Euro-area is at its strongest pace since January 2011, while the Euro-Zone Manufacturing PMI hit its all-time high to finish 2017.

In the coming week, attention will be on the final Euro-Zone CPI reading for December, in what amounts to the final inflation print of 2017 altogether. The final revision could very well be the wrinkle that gives traders pause in their determination to push the Euro higher, even if momentarily. Due in at +1.4% y/y from +1.5% y/y, and at +0.4% m/m from +0.1% m/m, the report doesn’t seem like it’s poised to be fuel for more upside.

But any pause the inflation data give mid-week should be temporary. Market measures of inflation continue to trend higher, and with the 5-year, 5-year inflation swap forwards, one of ECB President Draghi’s preferred gauges of inflation, closing last week at 1.739% - its highest level since February 21, 2017 – the ECB is probably feeling confident about its current trajectory of normalizing policy.

Traders will need to remain cautious about the overextended state of the futures market, where speculators are holding their largest net-long Euro position ever. For the week ended January 9, speculators held +144.7K net-long contracts, an increase from the previous all-time high set a week earlier at +127.9K. We maintain that as long as the Euro has strong fundamentals behind it, traders may continue to find excuses to look long the single currency as we approach the ides of January.