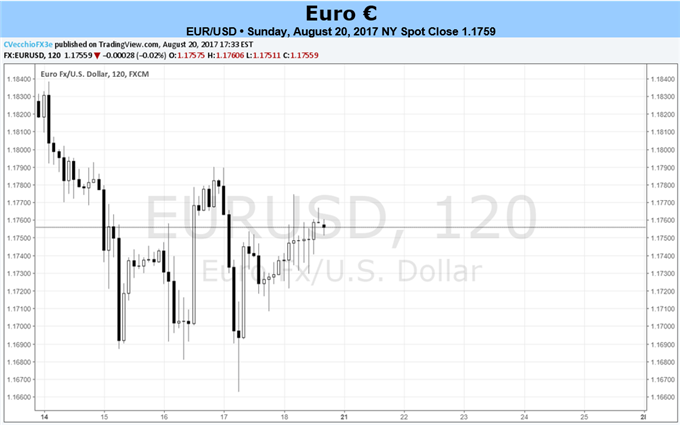 Amid positioning sitting at extreme levels, the Euro has found it increasingly difficult to continue its rally in recent weeks. After last week, when the Euro was the second worst performing major currency, it now appears that short-term tops are forming in several EUR-crosses. While EUR/GBP gained +0.60%, EUR/USD lost -0.51%, EUR/JPY fell by -0.52%, and EUR/CAD led the way lower, down by -1.24%.

The coming week will be a true litmus test for whether or not the Euro is actually topping given the high expectations that have carried it here: that the European Central Bank will taper its monetary stimulus perhaps as early as September. Ahead of time, it looks like ECB President Draghi’s upcoming speech at the Federal Reserve’s Jackson Hole Economic Policy Symposium will be a case of ‘buy the rumor, sell the news’ after developments last week.

While the July ECB meeting minutes didn’t offer new insight into recent market developments, a leak on Tuesday started to shape expectations for ECB President Draghi’s speech this coming Friday. Indeed, as we’ve speculated in recent weekly trading forecasts, it finally appears that the ECB may be starting to become concerned with persistent Euro strength.

The reality in FX markets is that with inflation so low, the Euro’s strength may only be tolerated for so long. The ECB’s technical assumption for EUR/USD in 2017 is 1.0800; it closed last week just below $1.1760. Between a strong Euro, middling energy prices, and persistent underperformance in inflation readings, and it’s easy to envision the ECB now taking issue with the market’s hawkish interpretation of expected forthcoming policy adjustments.

Given that the upcoming economic calendar is expected to show a further retracement in growth conditions vis-à-vis the preliminary French, German, and Euro-Zone PMI readings, failure by ECB President Draghi to signal a more hawkish shift in monetary policy could leave the Euro exposed to more downside. Considering that markets remain heavily net-long the Euro (per the CFTC’s COT report), a bit more profit taking could be in store for the Euro by the end of the week.