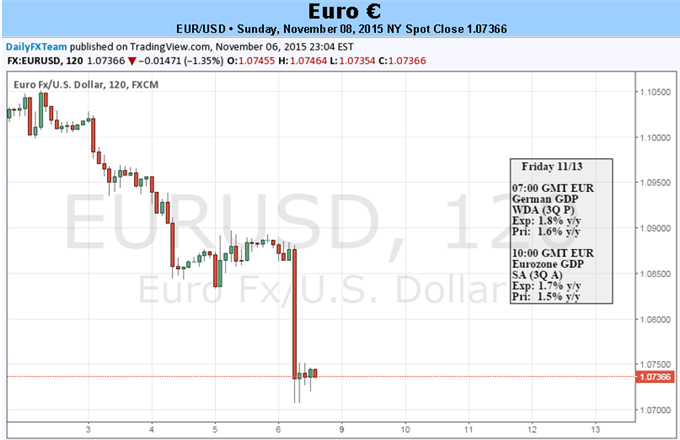 - EUR/USD was slammed after the October US NFP report blew expectations.

- The latest EUR/USD dive has enticed a wave of dip buyers in the retail crowd.

In a week without major domestic-driven influences, it's not surprise that the Euro had a mixed performance. Indeed, with the two major 'divergence' currencies moving in opposite directions, FX markets had a lot to grapple with in the first full week of November. On one hand, the Euro was a beneficiary: after the Bank of England's dovish shocker, EUR/GBP rallied by +0.02% to close the week at £0.7137, but only after trading as low as £0.7042; after the blowout October US Nonfarm Payrolls report, EUR/USD slumped by -2.47% to close the week at $1.0733.

Last week in this column, we wrote how there would need to be greater signs of policy divergence in order for EUR/USD to continue its decline; at that time, US economic data was middling, while Euro-Zone data was improving. Indeed, this condition was fulfilled with the exceptionally strong US NFPs. It must be understood that the entire upswing in the USD-complex is predicated on rapidly shifting rate expectations, which are now pricing in over a 70% chance of a 25-bps rate hike in December by the Federal Reserve. Yet EUR/USD's decline isn't foreshadowing the Euro's performance more broadly.

With EUR/USD back on the decline, and EUR/GBP remaining near its yearly lows despite the BoE’s dovish shocker on Thursday, the European Central Bank is probably pleased with recent developments along the FX front: the Euro will not be a strong headwind to inflation, assuaging nascent concerns after the late-summer rally.

In turn, with Euro-Zone economic data having been on the upswing recently – the Citi Economic Surprise Index for the Euro-Zone reads +22.1, whereas its US counterpart is flat at 0.0 – the ECB may not feel pressure from the market to go ahead and unveil its ‘big bazooka’ at the December meeting. ECB President Mario Draghi has already started to try to temper expectations of the ‘big bazooka’ being unveiled in December: a deposit rate cut alongside an enhancement to the current QE program (operating at a €60 billion/month run rate through September 2016).

Last week, he said in regards to the extraordinary easing program, “Those asset purchases are proceeding smoothly and continue to have a favorable impact on the cost and availability of credit for firms and households. But even though domestic demand remains resilient, concerns over growth prospects in emerging markets and other external factors are creating downside risks to the outlook for growth and inflation.” The translation: but for foreign economic issues, the Euro-Zone is humming along just fine for now and would be in a better place. With that outlook, why would the ECB be readying to introduce not one, but two extraordinary stimulus measures? It seems highly unlikely; we’ll probably see a deposit rate cut or an enhancement of the QE program in December, but not both.

With that said, even as EUR/USD sees renewed downward influence, the changing dynamics of prospective central bank easing leave other EUR-crosses in much less certain terms. For starters, now that the Euro, on a trade-weighted basis, is falling again, a lack of urgency on behalf of the ECB may provoke traders to tone down optimism – as expressed by increased exposure to higher yielding currencies funded by the Euro. Factor in a Fed that is seemingly more and more ready to tighten in December, then all of the sudden the stimulus environment looks a little bit softer than it did at the beginning of the quarter. So, while EUR/USD could see further downside pressure as markets continue to price in a December rate hike, other EUR-crosses may find some pause as investors seek to reexamine the central bank stimulus backdrop over the coming weeks. –CV