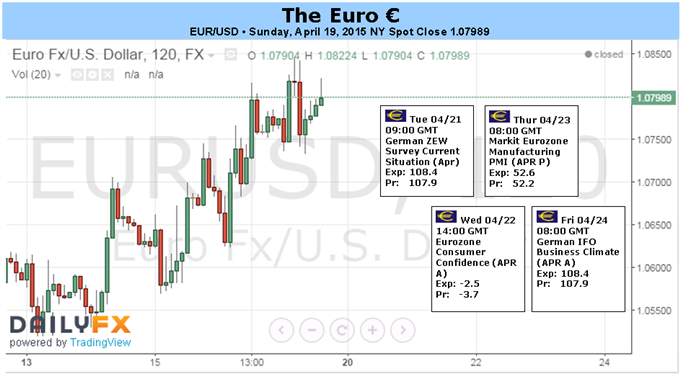 EUR/USD Appeal Due to Covering Potential, Not Yield Prospects

- The bearish technical formation in the USDOLLAR Index portends to a stronger EURUSD.

The Euro treaded water last week, losing ground against half of its major counterparts and gaining a bit more against the other three. The worst performance came against the Swiss Franc (EURCHF -0.91%), while the best performance came against the US Dollar (EURUSD +1.87%). In a week ripe with strife – be it on the political front, with more debt bantering with Greece, or on the monetary front, in the form of the European Central Bank’s third policy meeting of the year – the Euro fared reasonably well, all things considered.

With respect to the ECB meeting, President Mario Draghi has made it quite clear that market-borne talk of the QE program being tapered ahead of its projected September 2016 finale are premature at best, and misguided at worst. Before asset purchases cease, the ECB needs to see a stabilization in both actualized and expected inflation, which haven’t happened yet: core inflation resides at a mere +0.6% y/y; and the 5y5y inflation swaps closed the week at 1.693%, right at the four-week/20-day average of 1.678%. ‘Taper talk’ probably becomes more realistic once core inflation crosses the +1.2% y/y threshold, or if the 5y5y inflation swaps move above 1.800%.

For now, the Euro remains a weak buy against a basket of its major counterparts due to its deflating yield appeal and further crystallization as a funding currency. The Euro has lost and continues to lose its appeal as a growth currency as the differential between the short-end and the long-end of the yield curve (in Germany the 2s10s spread fell to 0.347% on Friday from 0.638% on January 1) decreases; and its appeal as a funding currency increases as rates towards the long-end drop into negative territory (German yields out to 9-years are negative).

The drop in sovereign yields decreases the demand for Euros. With nominal yields falling and inflation expectations holding stable (and even slightly rising), real returns on fixed income investments are decreasing; in turn, this fuels demand for higher yielding/riskier EUR-denominated assets like equities; or forces Euro-Zone-based investors to look outside the region for opportunity – which means capital needs to be converted from Euros into foreign currencies. This is the “portfolio balancing channel” effect that ECB President Mario Draghi has been discussing since the beginning of the year.

The Euro’s appeal, therefore, is rooted in the oversized short position currently in the market, which at least in context of EURUSD, could help propel covering in the very near-term (as was seen again this past week). As of March 14, there were 212.3K net-short contracts held by speculators in the futures market, off from 215.3K a week earlier (and down from the 226.6K seen during the week ended March 31, 2015). Otherwise, market participants are viewing the drop in Euro-Zone yields as a sign that the ECB will keep rates for an extended period of time, well-beyond the projected September 2016 finish for its QE program: the Morgan Stanley ‘months to first rate hike’ index currently resides at 56.5, suggesting a December 2019 or January 2020 rate hike at the earliest. –CV