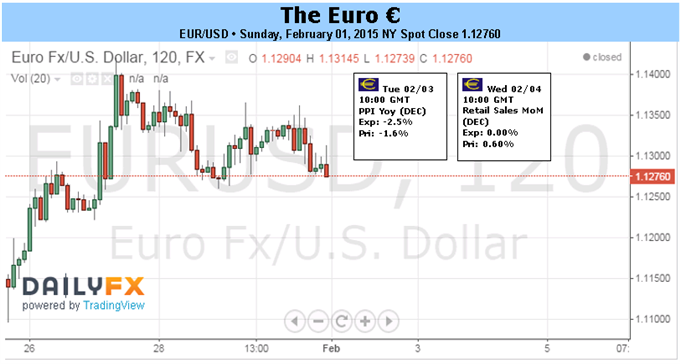 - EURUSD continues to ride its daily 8-EMA lower, a trend in place since December 17.

- The retail crowd has built up a net-short EURUSD position after selling into the recent rebound.

In the week after a ‘decidedly’ Euro-negative election in Greece, the market’s reaction wasn’t all that negative: the 18-member currency was the top performing major currency. Even as the anti-bailout, anti-austerity Syriza party rode a wave of populism into power – the first non-mainstream party to do so in Europe, a galvanizing moment for other fringe factions like Spains’ Podemos – market participants haven’t embraced the narrative of an existential crisis for the Euro-Zone. After touching an 11-year year low below $1.1100, EURUSD closed the week at $1.1276, a +0.77% gain, while EURCHF, the bellwether for fear in Europe, added +5.09%.

Given financial conditions in the broader Euro-Zone and the European Central Bank’s new QE program set to begin in March, traders may feel that, if there were ever a ‘good time’ for a panic over Greece, now would be that proverbial sweet spot. But let’s be clear: this isn’t a ‘just right’ Goldilocks moment. With new Greek leadership juggling the demands of its electorate as well as the desire to remain a full-fledged member of the Euro-Zone, and six-weeks until the ECB’s QE program begins, the Euro has now entered a headline-driven cycle.

One such example of how markets have shifted their focus to the newswires has been the recent outperformance of Euro-Zone data, and how little attention it’s been given. The Citi Economic Surprise Index ended the week at +10.0, the highest level since January 5 (+12.4), and close to being at its highest level since Q1’14. The fact of the matter is that positive economic developments – at least, relative to what markets are expecting – haven’t been feeding into higher inflation expectations.

The 5-year, 5-year inflation swap rate, a measure used by central banks and dealers to gauge market’s future inflation expectations, closed the week at 1.575%. Inflation expectations have consolidated between 1.453% (January 13 low) and 1.822% (January 23 high) as recent positive economic data hasn’t fed into expectations of a longer-term rebound in the region’s growth prospects. As long as this feedback loop is broken – good news not feeding into higher inflation expectations – the Euro has little chance to break from the current ‘sell rallies’ mindset that traders have embraced.

Overall, the market is still heavily-skewed to the short side in the Euro, with 184.8K net-short contracts on speculative traders’ books in the futures market. But this figure hasn’t changed all that much in recent months, and isn’t exactly indicating that we’ve reached a short-term extreme. For the week ended January 20, there were 180.7K net shorts; for the week ended November 4, 2014, there were 179.0K net shorts. As we discussed back on November 5, the influx of capital into the Euro-Zone the last few years may allow overstretched short positioning in the Euro and long positioning in the US Dollar to persist, which it has for the past three-months. Now, as traders await the ECB’s QE program to kick off in March, it’s clear that the headline-driven market is a veritable state of purgatory for the Euro. –CV