Gold Prices at Resistance into August Open- NFPs In Focus

Gold prices snapped a two-week losing streak with the previous metal rallying more than 1.7% to trade at 1346 ahead of the New York close on Friday. The advance comes alongside a steep sell-off in the greenback with the Dollar Index (ticker: USDOLLAR) reversing sharply from technical resistance early in the week. Despite the recent rebound, prices are now approaching resistance with the immediate topside bias at risk heading into next week. Ideally we’ll be looking for a more prominent set-back to offer more favorable long-entries near structural support.

U.S. 2Q GDP figures released on Friday grossly missed expectations with an annualized print of just 1.2% q/q and a downward revision to last quarters’ already dismal read to just 0.8% q/q. The core personal consumption expenditure (PCE), the Fed’s preferred gauge of inflation, slipped to 1.7% from 2.1% the previous quarter. The combination of slower-than-expected growth & weak inflation all but nullifies prospects for a rate hike at the upcoming September meeting. Fed Fund Futures saw a dramatic decrease in interest rate probabilities on the back of the release with markets now pricing in the first material expectation for a rate hike (>50%) to be in September of 2017.

Looking ahead to next week, traders will be closely eyeing the U.S. economic docket with ISM data, factory orders, ADP employment and non-farm payrolls on tap. With growth concerns beginning to take root, a weaker print on labor markets could have a more pronounced impact on gold prices as the bar remains high for the central bank normalization. If expectations for higher rates continuing to diminish, expect gold prices to remain broadly supported as investors seek the relative safety of bullion as a store of wealth amid the ongoing market turmoil. That said, prices are now approaching a resistance zone that leaves the immediate advance vulnerable heading into the open of August trade. 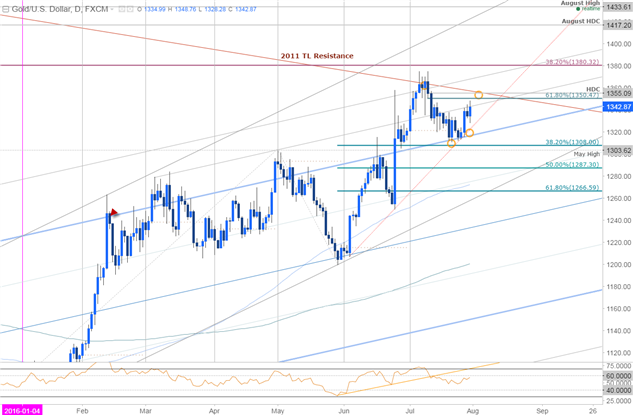 From a technical standpoint, our outlook for gold remains unchanged from last week. Keep in mind gold prices turned from a key trendline resistance extending off the 2011 record high this month and the risk remains for a move lower before resumption of the broader up-trend. Keep in mind we’re heading into the August open & we’ll be looking for the monthly opening range for guidance on our medium-term outlook.

From a trading standpoint, the immediate rebound is eying key near-term resistance & bearish invalidation at 1350/55- a region of interest for near-term exhaustion / short-entries. A break below the 1303/08 support zone targets 1287 & key confluence support into 1266/71- a region defined by the 61.8% retracement of the late May advance & the 100-day moving average and converges on basic trendline support off the December lows late in the week. I would be looking for long-triggers on a move into this range. Continue to track this trade throughout the week on SB Trade Desk.