Australian Dollar Likely Loser In Ugly Contest With US Cousin 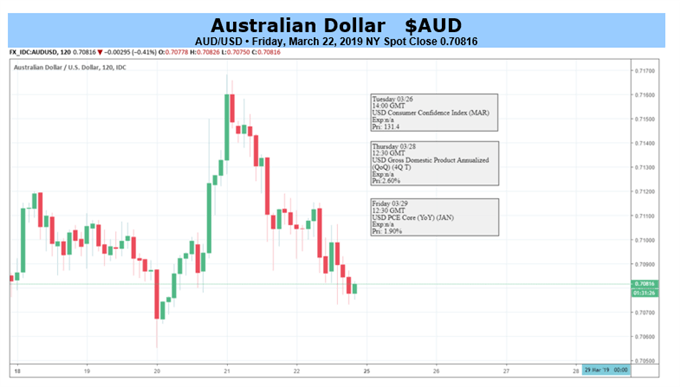 The Australian Dollar faces a very modest week of domestic economic data which will likely leave current themes to play out a little further.

The currency shared fully in the lift given to many US Dollar rivals when the Federal Reserve struck a dovish monetary policy tone last Wednesday. That central bank now only expects rates to rise once before the end of 2020 as a base case, and some futures markets doubt that we’ll see even that solitary move. No wonder the greenback slipped.

However, there was a little rethink shortly after the Fed shot its bolt. Markets came to the fully logical conclusion that, if the US is going to halt monetary tightening, then those who’ve yet to start surely won’t be doing so anytime soon. This category includes of course the Reserve Bank of Australia. Its own key short-term interest rate is stuck at the 1.50% record-low which has pertained since August 2016. Indeed, the RBA itself changed tack last month and admitted that more cuts could be needed. Before it had loudly trumpeted the view that the next move was likely to be a rise.

If the Fed’s announcement has turned developed market currency trading into a ‘least ugly’ tournament, then the US Dollar is at present the most likely winner simply because its base rates start the contest higher than most.

There was a little cloud cast over one of the Australian economy’s brightest spots last week. Official employment data showed a very modest increase in overall employment and a sharp-fall in full time hiring. Both were glossed over in the market by news that the official unemployment rate edged down in February below 5%, for the first time since 2011. Still, there’s no denying that this was a very mixed set of figures and a very far cry from the blockbuster releases we’ve become almost used to. This series can be volatile but the next release will bear close watching. After all, even strong employment growth has proven resolutely non-inflationary for Australia, part of the clear lack of pricing power which continues to weigh on Australian interest rates.

In the coming week then, the Aussie may well benefit as it often does from any gains in general market risk appetite. But with interest rate differentials back to the fore, its bulls may find little to celebrate. It’s a bearish call this week. 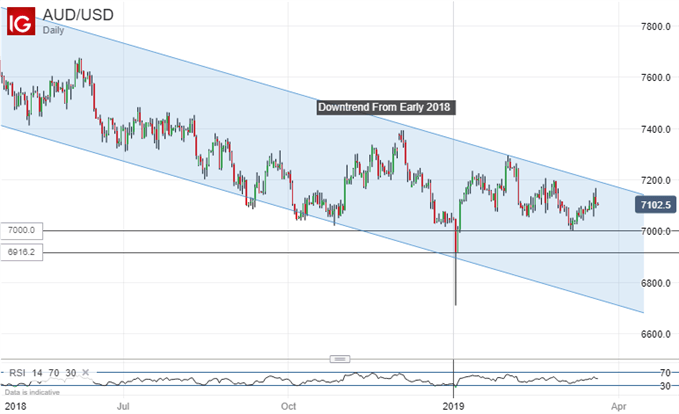