Australian Dollar Limps Into New Week, May Well Stay Down 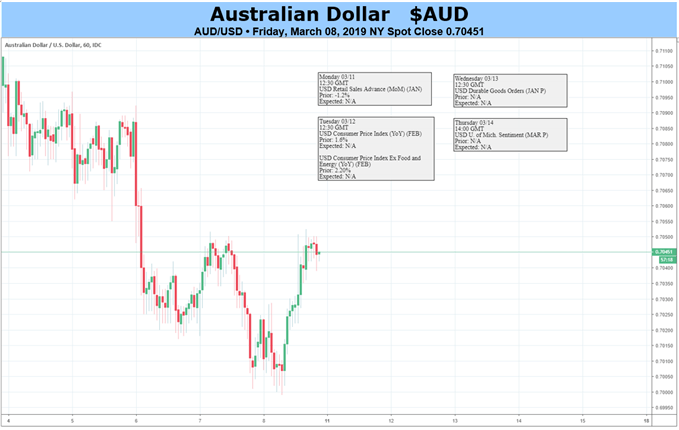 Australian Dollar bulls endured another punishing week in which the currency traded down to lows not seen since early January.

There were many catalysts for this, but the strongest was unarguably a very weak Gross Domestic Product release out of the Aussie’s home country. The 0.2% on-quarter growth logged in the final three months of 2018 was the weakest print since the third quarter of 2016. It was below market expectations, too.

AUD/USD has been defensive for some time, not helped by last month’s comprehensive hack at growth and inflation forecasts by the Reserve Bank of Australia. The GDP only made things worse.

The bottom line is that Australia’s record low Official Cash Rate of 1.50% will be with us for some time yet (and it’s already more than two years old). Indeed, futures markets now price in a further reduction by the end of this year. Expectations in this direction have been getting sharper and more urgent since the final months of 2018.

There is no domestic economic data on tap in the coming week which is likely to make any permanent dent in this forecast.

We will get snapshots of both business and consumer confidence, along with a look at inflation expectations. However, while any or all of these could mean short-term AUD/USD fluctuations, none will alter the basic fact that the Australian Dollar completely lacks monetary policy support.

Of course, as the Euro amply demonstrated last week, other currencies are in a similar position when it comes to their own central banks. Moreover, given the dearth of domestic drivers, the Aussie is likely to be especially vulnerable to international goings on.

Even so it is very hard to get very bullish. After all, this year’s lows guard the way to nadirs unseen since 2009. 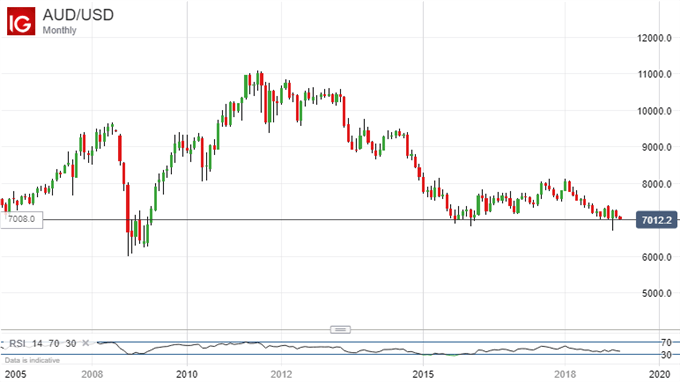 There remains the looming risk of a trade settlement between the US and China. That may or may not prove the silver bullet for global economic woes that some seem to think it is. But it would certainly give markets a short-term boost, perhaps a significant one. As a key partner of both Washington and Beijing, Australia and its currency stand to benefit here.

However, on balance no news is unlikely to be good news for the Australian Dollar in its current mood, so it’s a bearish call from me.