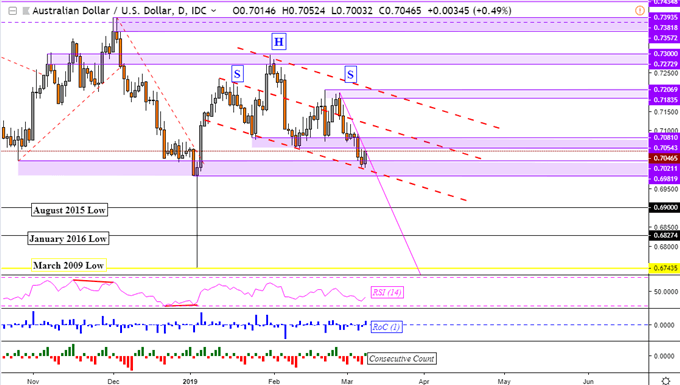 In this week’s poll, the top two requested Australian Dollar pairs for this technical forecast were AUD/JPY and AUD/NZD. Follow my Twitter account here @ddubrovskyFX for the opportunity to participate in each week’s vote. There, I will also be offering timely updates on the Aussie Dollar.

Looking for a fundamental perspective on AUD? Check out the AUD Fundamental Forecast.

AUD/USD extended its decline during the first full week of March, following obediently the path of a bearish head and shoulders reversal pattern. The pair broke through key support at 0.7054 before failing to then breach the following barrier at 0.7021. The former support area halted the subsequent ascent during a rebound on Friday, introducing itself as now resistance. This establishes a new falling resistance line from late February (pink line on the chart below).

Meanwhile, the downward-sloping neckline of the head and shoulders pattern (lowest dashed red line) held as support. In the past, each time the neckline was tested, it preceded a temporary bullish reversal. This risks being the case again next week should the aforementioned resistance be overtaken with a daily close. Otherwise, an extended decline would place 0.6981 as support followed by the August 2015 low. Taking this into consideration, there is currently a neutral setting for AUD/USD.

I have been closely following the ascending triangle in AUD/JPY which is typically a bullish continuation pattern. That said, this past week AUD/JPY broke through the floor of this candlestick formation. With that in mind, the ascending triangle appears to be acting as a continuation pattern of the prior downtrend in December. As such, the technical outlook has turned bearish.

To calculate the target derived from the ascending triangle, I have taken the height of the shape and subtracted it from the breakout point on March 6. This leaves 74.45 as a rough estimate of where prices may end up in the medium term. This requires passing support at 77.49 followed by 75.24 (early January closes). Otherwise, resistance is around 79.84 which is the peak of the ascending triangle. 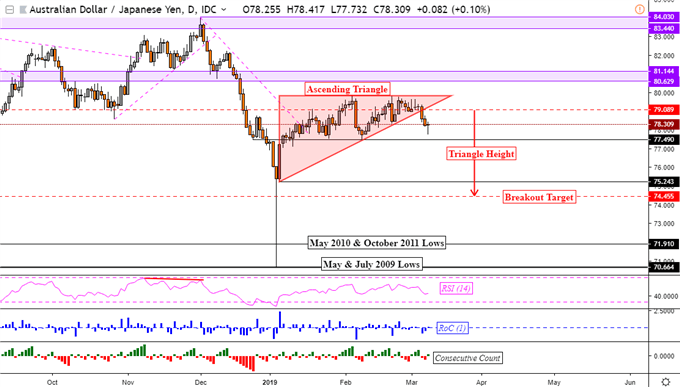 AUD/NZD remains confined within a descending channel, following it to achieve its lowest close in over two years! Fundamentally, this has largely been driven by a dismal Australian GDP report. Ahead, the New Zealand Dollar may struggle to achieve additional gains against its Australian cousin. The pair remains within a support range consisting of June/February 2017 lows, the outer boundary seems to be around 1.0326. Meanwhile, positive RSI divergence warns downside momentum is fading. With that in mind, the AUD/NZD technical forecast seems neutral. 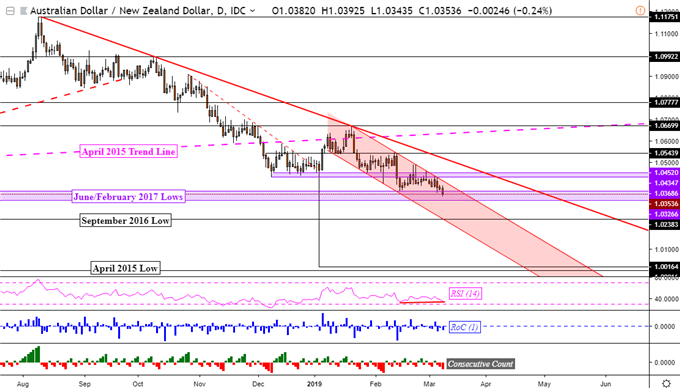