I casted another poll to see which Australian Dollar pairs traders were the most interested in seeing. This week the top two choices, in addition to AUD/USD, were GBP/AUD and AUD/JPY. Due to the increasing popularity of the vote, I will be conducting another one next week on my Twitter account which you may follow here @ddubrovskyFX. There, you will also find timely updates on the Australian Dollar.

The Aussie pair that arguably made the most amount of progress last week, rising almost 2%, was GBP/AUD. It added to an impressive bullish push that began two weeks ago, as anticipated. Yet, it was unable to push beyond critical resistance at 1.8732. In addition to this past week, this area was tested back in October and then in early January. It is preventing GBP/AUD from achieving its highest daily close since June 2016, the month of the Brexit Referendum.

Arguably, sustaining this momentum should require major fundamental support. Recently, this has been due to decreasing chances of a ‘no-deal’ Brexit as it could get delayed. But there are numerous uncertainties that remain for the British Pound ahead as pushing back the divorce would continue keeping the markets in suspense. Meanwhile, the sentiment-linked Australian Dollar is being primarily driven by volatile risk trends.

For technical considerations going forward, the presence of negative RSI divergence warns of ebbing upside momentum. Conveniently, this has occurred right as prices reached a stubborn resistance level. With that in mind, the pair might be in for a pause in its ascent ahead which would place support at 1.8508 followed by 1.8434. Still, we shouldn’t dismiss the possibility of the highest daily close since June 2016. But confirmation would be needed to argue that the dominant uptrend from December could resume. My forecast is neutral. 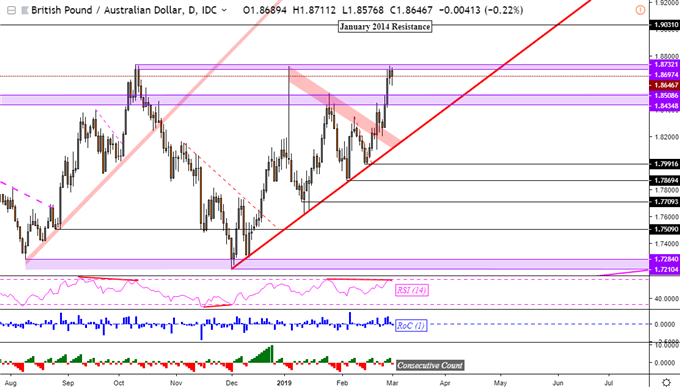 Last week, I offered a bearish AUD/USD technical outlook after the formation of a head and shoulders reversal candlestick pattern. It still remains in play as we head into the new week, with resistance reinforced at the right shoulder between 0.7183 and 0.7206. The pair was unable to breach support beyond 0.7054 however, sitting above it towards the end of Friday’s session. A break under this area would be a warning sign that a new downtrend could ensue after a couple of months of consolidation. As such, the forecast remains bearish.

Looking for a fundamental perspective on AUD? Check out the Weekly AUD Fundamental Forecast. 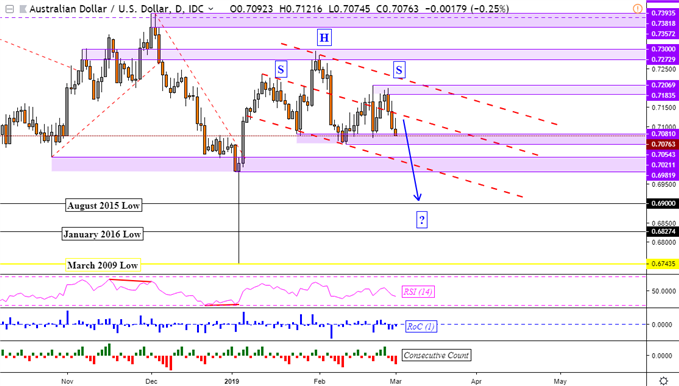 Much like AUD/USD, AUD/JPY is also holding on to its candlestick formation. Except this one, an ascending triangle, is a bullish one. This past week, the pair reinforced the horizontal line of the triangle at 79.84 which is near-term resistance. Meanwhile, the rising support line from the beginning of this year remains in play. A break above the triangle would be a bullish signal which would ideally require confirmation. At that point, the pair faces a formidable range of resistance between 80.62 and 81.14. Taking this into consideration, the bullish call in AUD/JPY remains in play. 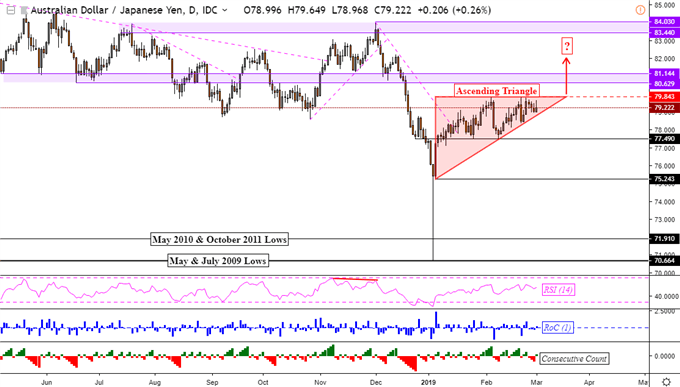