Every week, I am conducting a poll on Twitter to determine which two Aussie pairs (in addition to AUD/USD) have the most interest. This time the first choice was AUD/NZD followed by a tie between AUD/JPY and GBP/AUD. To break it, I chose the latter. If you would like to participate in these votes, follow me on Twitter @ddubrovskyFX where I will also be posting timely updates on the Australian Dollar.

In last week’s forecast, AUD/USD fell through multiple support barriers which resulted in a slightly bearish outlook. That has now been changed to neutral after prices were unable to get much further beyond 0.7081 before turning back higher. This created a new support range between 0.70543 and 0.7081. As the week ended, immediate resistance held at 0.71452 which is the December/May 2016 lows.

Going forward, this area may prove to be tough for AUD/USD to push through. This is because a descending resistance line from January 11 also stands in its immediate path. With that in mind, a push above these barriers may open the door to testing early February highs (0.7272 – 0.73). Meanwhile, a descent through support exposes 0.7021 – 0.6981. 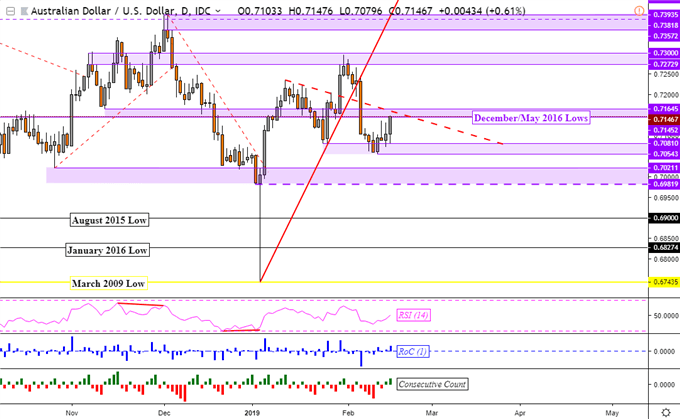 Looking for a fundamental perspective on AUD ? Check out the Weekly AUD Fundamental Forecast.

AUD/NZD experienced its worst week since January 21, falling a little over one percent. Fundamentally, this came against the backdrop of a less dovish RBNZ rate decision than expected which I covered live and created a recording of. This has also reinforced the pair’s fundamental trait as a ‘risk-neutral’ currency pair, focusing instead on the difference in monetary policy expectations between the RBA and RBNZ.

Prices fell through a critical area of support between 1.0452 and 1.04347, exposing June/February 2017 lows. While a break through the former is rather notable, additional confirmation should be needed to argue that the pair is resuming the dominant downtrend from August. Clearing 1.0368 – 1.0326 might be that sign. If AUD/NZD turns higher, watch out for a potential new falling resistance line from January 21. 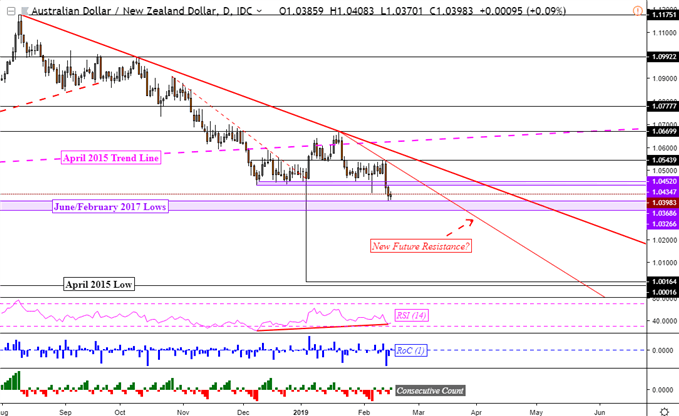 GBP/AUD finds itself sitting on a well-defined rising trend line from December 2018 after experiencing declines this past week. If it holds as it did in the past, GBP/AUD may be heading for a push higher in the near term. Watch for a close above a falling resistance line from February 8, which would expose a descending range from January 3. With that in mind, it is a slightly bullish call for GBP/AUD. 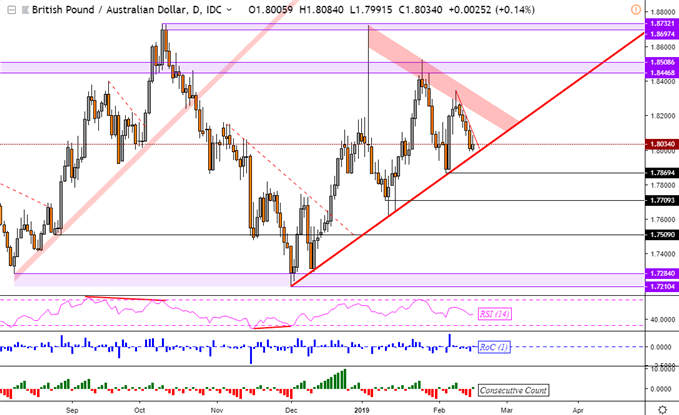