Australian Dollar Must Await RBA Which May Try Talking It Down 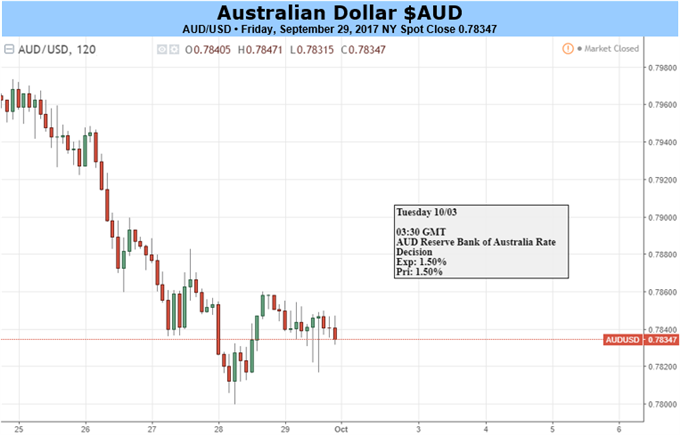 The end of last week found the Australian Dollar near six-week lows against its US cousin.

There wasn’t anything especially currency-specific about this weakness. The US currency found general support among investors prepared to bet that a proposed cut in tax rates will pass Congress and go on to boost both economic growth and inflation. President Donald Trump’s plan was characteristically short on detail and will face high legislative hurdles. Congress will only sit for 30 more days this year. But it proposes swingeing tax cuts and that was enough to see the US Dollar off to the races. Global investors always like a US tax cut and, with two-year US Treasury yields now at highs not seen since 2008, the greenback’s allure is clear.

That allure took AUD/USD down to the 0.7800 level, where support for the Aussie has held firm since July. Will it continue to prop up the market?

Well, the coming week will bring October’s monetary policy decision from the Reserve Bank of Australia. In one respect this will probably be a bit of a yawn. The Official Cash Rate is yet again expected to stay on hold at its 1.50% record low - indeed futures markets still don’t see a rise until well into 2018. Assuming they are right (and I think we can), the main focus of this meeting will be on any statement the RBA cares to make.

In the past, it has been vocal about what it sees as the damaging effects of a too-strong Aussie on everything from its own inflation mandate to economic growth more broadly. Now, beleaguered it may be but AUD/USD remains very close to highs not seen since 2015 and yet the RBA has taken some of the heat out of this rhetoric in recent weeks. Indeed, officials can now get near a microphone without mentioning the currency at all.

There are two probable reasons for this. The first is that, obviously, the Australian Dollar has been heading lower anyway, a development which presumably suits domestic policy makers. The second is that foreign exchange moves are now so dominated by the US that it hardly makes sense for central banks to either fight or approve currency actions which will happen anyway as investors mull fiscal and monetary policy Stateside.

If the RBA decides to leave the currency question alone this week, then the Australian Dollar may continue to hold around the 0.7800 support level. If it decides to try and take a bit of advantage of AUD/USD’s general direction by trying to talk the currency down a little more, then we could see a broader slide.

On the thesis that they might well try, it’s a bearish call this week. But only just.