The British Pound may fall if the Bank of England’s Financial Stability Report (FSR) spooks markets amid the publication of manufacturing, services and composite PMI data. All three are expected to show contractionary prints at 49.2, 49.5 and 49.5, respectively. This is in large part due to the Brexit-related uncertainty at the time the survey was taken. However, recent developments may push these numbers higher heading into 2020.

The UK election last week was a landslide victory for Conservative Party leader Prime Minister Boris Johnson. His political group was able to secure 43.6 percent of Parliament with 13,966,565 votes, over three million more than the Labour which garnered 10,295,607 votes and filled 32.2 percent of the legislature. The British Pound initially surged over 2 percent against the US Dollar with a similar decline in EUR/GBP. 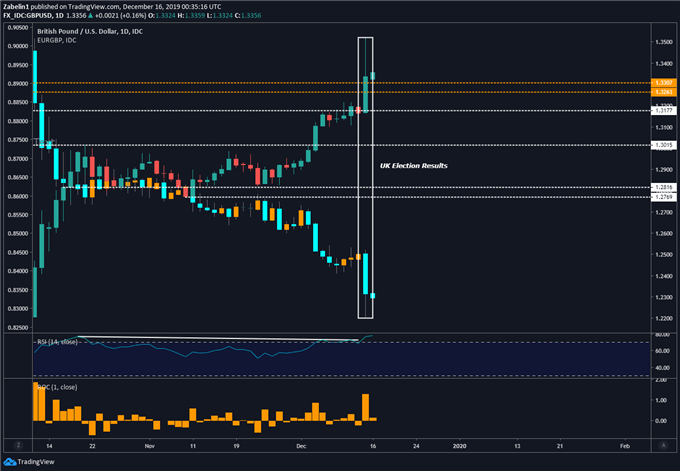 Markets will be eyeing the January 31 Brexit deadline when the UK is officially set to depart from the EU if they pass the existing withdrawal agreement. After that, traders will closely watch how both parties sort out the details during the transition period until December 2020 with an option to extend to 2022. For now, the British Pound may continue its relief rally, but its gains may be trimmed if uncertainties begin to pile up again.

Following the market-friendly outcome of the election and partial alleviation of Brexit uncertainty against the backdrop of precarious improvements in US-China trade talks, UK PMI data may start to improve. While one reading may not have a particularly significant impact on BoE monetary policy, continual improvement could tilt officials to become more hawkish. This may in turn help push the British Pound higher.

The BoE will be publishing its bi-annual FSR after deciding to postpone its second release until after the UK election. Given the outcome, the undertones may carry greater optimism than had the election produced a fractured Parliament and increased the likelihood of a no-deal Brexit. However, officials may cite the transition period and future negotiations with the EU as a possible major source of uncertainty and volatility.