Yen May Rise as Markets Turn Defensive Before US Midterm Elections

The British Pound outperformed in overnight trade, seemingly buoyed another burst of Brexit-related optimism. That followed a Times article over the weekend claiming that Prime Minister Theresa May has secured enough concessions from her Brussels counterparts to keep the UK within the EU customs union, resolving the thorny issue of a hard post-Brexit border running through the island of Ireland.

The New Zealand Dollar corrected lower after hitting the highest level in three months on Friday. Traders may have been inspired to dial back exposure ahead of the upcoming RBNZ monetary policy announcement. The central bank is widely expected to keep the benchmark cash rate unchanged but the rhetoric accompanying that decision may still generate volatility by shaping the future policy bets.

YEN MAY RISE AS RISK APPETITE WILTS BEFORE US MIDTERM ELECTIONS

Looking ahead, a quiet European data docket may put sentiment trends at the forefront. Bellwether S&P 500 futures are pointing convincingly lower, hinting that the risk-off lead set in Asia Pacific trade has scope for follow-through. That may be most obviously supportive for the usually anti-risk Japanese Yen (though it was surprisingly muted in APAC hours).

Pre-positioning for Tuesday’s US midterm elections probably accounts for investors’ defensive mood. The outcome may prove to be formative for financial markets in that it would establish a lead on key aspects of economic policy, from the pace of Federal Reserve interest rate hikes to the direction of the on-going trade war between the US and China. 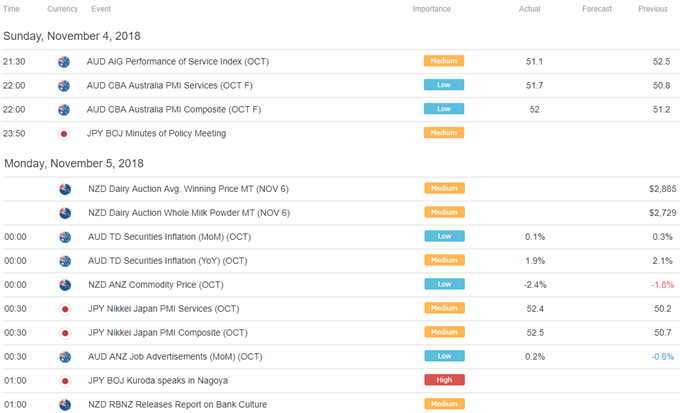