Asian Stocks Wilt Across Board, US Midterms, Central Banks Eyed

Asian stocks were broadly lower Monday despite some late vigor from Wall Street last week, Investor worries about weaker global growth and the effects of higher US interest rates seemed to be in charge.

Chinese President Xi Jinping tried to position China as a globalization’s standard bearer in a speech kicking off China’s International Import Expo. This event will put the spotlight on China’s propensity to consumer global goods, when so often its vast export machine grabs attention.

Focus is also of course on the US Midterm Elections which will be held on Tuesday. They will be voters’ first chance to pass real verdict on Donald Trump’s Presidency and, despite a strong economic performance, polls suggests that the Democrats could do well. The week will also bring three major central bank monetary policy decisions, from the US, Australia and New Zealand.

Currency markets were generally subdued, with the US Dollar inching lower against most major traded rivals. The UK Pound picked up a bit of steam on reports that a Brexit customs union deal might be close, but it remains far from certain that any arrangement denying the UK the right to make its own trade deals would pass the House of Commons in London.

The Japanese Yen is still struggling against the US Dollar, with USD/JPY’s uptrend channel from late October still intact. Bank of Japan Governor Haruhiko Kuroda said monetary largesse will continue until inflation sustainably tops 2%, further highlighting the policy gap between the BoJ and the Federal Reserve. 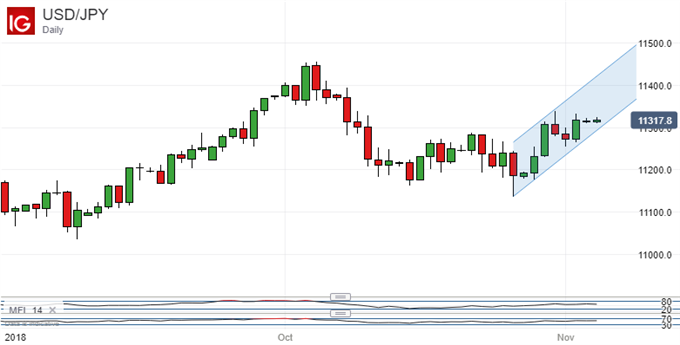 US Dollar bulls are maintaining the fight and still have this year’s peak in their sights.

Gold prices were steady, while crude oil prices edged down. They were reportedly undermined by last week’s news that the US will apply various wavers to its sanctions against Iran.

Still awaiting investors on Monday are data on US personal consumption and expenditure which will see daylight after official US public borrowing figures.