Well, we’re finally here at Fed week. And, as has become custom, the air has already been let out of the sails to a degree as sellers have went on attack even before the Fed begins to meet for their rate decision. A similar background had developed for stocks in the month of March when the Fed was expected to begin lifting rates. They were also expected to announce a start to QT, which they avoided doing. The net result, even despite lifting rates for the first time since 2018, was a strong move in stocks as investors stepped back from the proverbial ledge.

The S&P 500 rallied by as much as 12.14% in the back-half of March, largely on the basis of that FOMC rate decision. The Nasdaq 100 put in a 17.97% move over the same period of time, helped along by a Fed that hiked rates by 25 basis points but, curiously, avoided the topic of QT for another day.

At this point we have a similar sell-off to start the week and there’s been a strong move pricing-in since about an hour ahead of the Thursday close. Treasury rates are jumping and that’s continued through this week. The core of the push seems to be emanating from expectations for a 75 basis point hike in July, which markets are currently pricing-in with an approximate 50.7% probability. 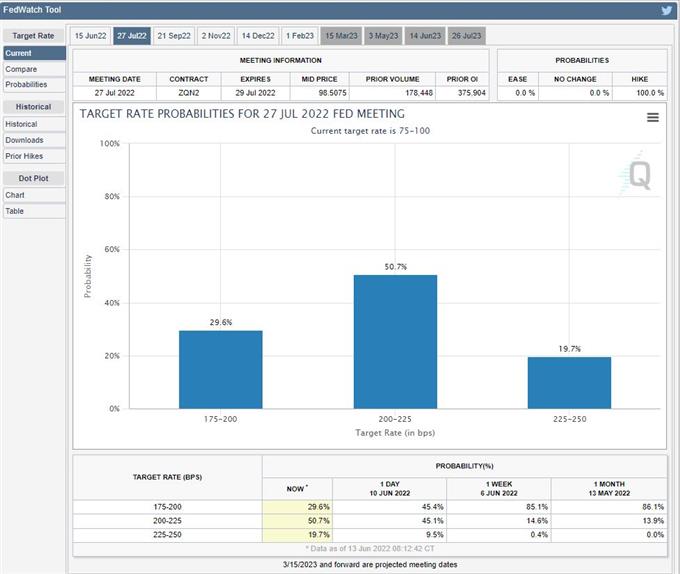 Stocks have already put in an impressive move and, again, much of that started with about an hour to go in Thursday’s session. Ahead of that break, stocks had traded in a rectangle formation, aka a ‘box formation,’ as prices bandied back-and-forth in a range for almost nine full days.

I had looked into that backdrop last week ahead of the break. And I then published an article as the breaks were beginning to show.

The breakdown from those box formations has proven to be significant and, at this stage, is still ongoing. The S&P 500 has set a fresh yearly low while testing a massive area of support, around the 38.2% Fibonacci retracement of the pandemic move. This is also around the -20% mark from the recent highs, denoting bear market territory for the index.

As looked at in this weekend’s forecast, the Nasdaq 100 remains in a more bearish state than the blue chip index looked at above and the bearish theme here even has some greater development.

While the S&P 500 is testing the 38.2% Fibonacci retracement of the pandemic move, the Nasdaq 100 has already scaled-down to the 50% marker of its pandemic move. And we’ve seen a fresh low here, as well, although buyers appear to be holding the line, or trying to, around the prior May swing-low at around 11,500. A breach of that level ahead of the FOMC opens the door for a continuation of the bearish break down towards the 11k psychological level on the chart.

At this point we’re seeing a bit of support playing-in off of that prior low. This gives scope to a potential pullback at which point traders can look for lower-high resistance with the aim of trend-continuation plays. The 50% retracement level from the pandemic major move is just under 11,700, and that can be a nearby point of resistance for traders to use. There’s also some gap from this week’s open, showing around 11,850 which could be looked at as an ‘r2’ level of resistance. Above that is a potential ‘s3’ around the 12,222-12,255 area. And, if a bullish move can start to develop, prior box support is up around 12,442 and that can be considered a bigger picture resistance level.