US Dollar Catches Support After Another Core CPI Print at 2.4%

This morning brought the release of CPI numbers out of the United States for the month of September and similar to what’s been showing of recent, Core CPI, stripping out food and energy remained strong while headline CPI continued below the 2% marker.

On the strength side of the equation, Core CPI followed up last month’s surprising print at 2.4% with another 2.4% read; which came in right at the expectation. This marks now the 19th consecutive month with Core CPI printing above the 2% threshold and this also highlights how inflation may remain on an upward trajectory considering the two very recent cuts from the FOMC. Core CPI began to tilt-higher after bottoming out in May at 2%, and continued to increase through June and July, before the Fed had started to cut rates again.

This may be another reason for the Fed to hold rates at the October rate decision, potentially dampening hopes for another cut at the FOMC meeting later this month. While growth pressures remain fairly visible, the argument can be made that not enough time has yet transpired for those two recent rate cuts to transmit through economic data. 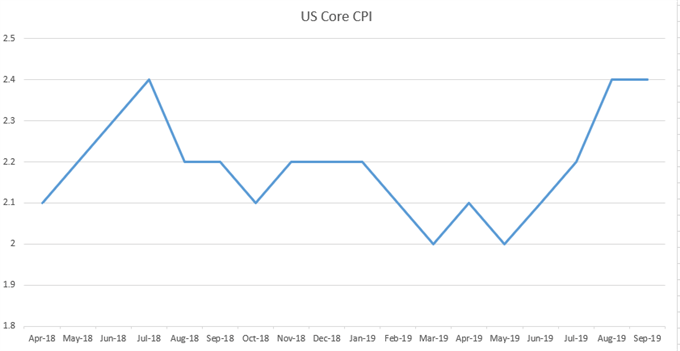 On the other side of the coin, headline CPI disappointed slightly, printing at the same 1.7% as last month versus an expectation of 1.8%. This indicator has been fairly stable since last year’s fall from just under 3% to below 2. 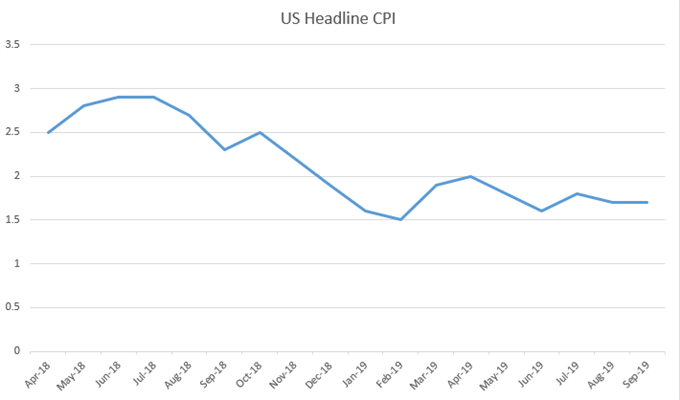 Ahead of this morning’s data the US Dollar was selling-off, helped in-part by some less dovish remarks in the ECB meeting minutes around the Euro. This helped EUR/USD to break-above that confluent zone of resistance around the 1.1000 handle that had helped to hold the highs over the past week and, correspondingly, the US Dollar broke-down to fresh near-term lows, finding bids just above last week’s swing-low.

The big question around EUR/USD at the moment is whether bulls can maintain this morning’s breakout, and the CPI release may help to confirm or deny this thesis. EUR/USD price action has broken out to fresh two-week-highs and that prior area of resistance at 1.1000 can be used for higher-low support scenarios. Should USD-strength continue to price-in on the back of this morning’s CPI report, a hold of that support at prior resistance can open the door for bullish trend strategies, looking for buyers to continue pushing-higher on the charts.

Taking a step back to look at the big picture, the primary question right now is whether we’re in a position where US Dollar bulls can make more of a mark. The US currency has remained bid through 2019 trade, including Q3 when the FOMC began cutting rates again. But, the manner in which the bank has so far moderated policy has left traders looking for signs or clues or innuendo of what’s to come next, as the FOMC has framed both rate cuts thus far as ‘insurance rate cuts.’

That, combined with the intense focus on the matter of both USD price action and FOMC monetary policy from President Trump, and a bearish reversal formation has built in the Greenback this year. Buyers are shy or trepidatious at-or-around highs while being more aggressive around lows. This has produced a rising wedge formation which will often be approached with the aim of a bearish turn, looking for that lack of enthusiasm from bulls around resistance or fresh highs to, eventually, push through for a break of support.

On a shorter-term basis, the big question is whether this morning’s CPI data can bring a lasting response in the Greenback. Prices are currently bouncing from last week’s lows, around the 98.65 level on DXY and attention will likely turn towards tomorrow’s release of Consumer Sentiment Data out of the University of Michigan for that next clue on forward-looking performance of the US economy.