- The next big item on the economic calendar is a Bank of Japan rate decision to be held on Tuesday morning (Monday night in the U.S.).

- With inflation showing with a bit more consistency, the big question is whether the BoJ might be nearing readiness towards stimulus taper.

The BoJ is On Deck

The big item on the calendar over the next 24 hours is the Bank of Japan’s first rate decision of the year. The BoJ was looked at and watched as one of the more passive Central Banks last year, with the Japanese Yen as one of the few currencies keeping track with the U.S. Dollar’s weakness in the last nine months of 2017 as price action in the pair remained in a range-bound state.

Shortly after we opened the door into 2018, worries began to grow that the BoJ might embark on a ‘stealth taper.’ Given the bank’s open-ended bond buying program, the fact that they bought fewer long-dated bonds earlier this year triggered thoughts that they may be slowly drawing down QE purchases before making any formal announcements of as such, and this equated to about three trading days of aggressive Yen strength.

The thesis is somewhat supported by the encouraging trend that’s been seen with core inflation in Japan. After coming-in at -.2% last December, core inflation went on a steady track higher throughout 2017, coming in at .9% for November. This is still far below the bank’s 2% inflation target, but the trend is encouraging nonetheless. 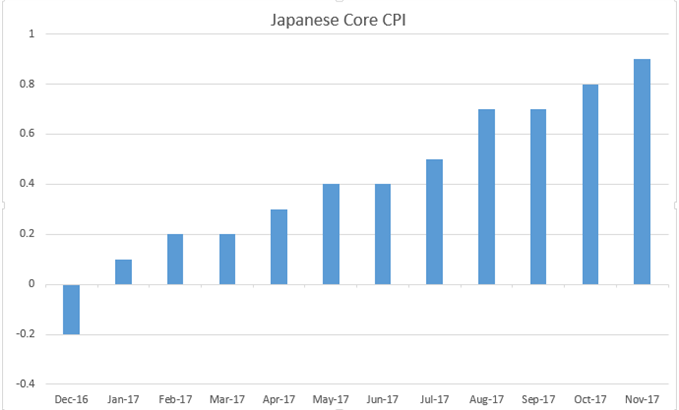 The Bank of Japan has previously said that they’re confident that the economy will be able to hit their 2% inflation target inside of the next two years; but this is something the bank has been saying for a while (much longer than just the past two years) without it actually coming to fruition. Also of concern is the fact that the BoJ may still be gun shy after their move to negative rates two years ago seemed to really blow up; bringing on months of Yen strength, diametrically opposed to their initial goal of more weakness.

After that move, the BoJ has made a noticeable effort at being more open and transparent with markets. And while we have seen a few tweaks to the program since January of 2016, there haven’t been any major changes nor has the bank had any significant announcements since, as the issue has been fairly clear-cut: Japan is still far away from the 2% inflation goal, so there was really very little reason to expect any significant modifications to policy parameters.

Even within the BoJ of recent, any dissent has been aimed towards even more easing. Newly installed BoJ board member, Gouishi Kataoka dissented at BoJ rate decisions multiple times last year after his first meeting last summer; and each of those dissents was aimed at the BoJ not doing enough to return the economy to 2% inflation.

This overriding dovishness has appeared to bring a lasting effect to currency markets, as that strength that showed up in the Yen was quickly faded-out of many currency pairs. Below, we’re looking at EUR/JPY quickly returning back towards highs after that earlier spill we discussed earlier, aided in part by a trend-line projection that helped to carve-out the low.

The Big Questions Around the BoJ:

Reducing matters to the least common denominator, it would appear that the big questions revolving around the Bank of Japan are a) when they might plan to make an initial move away from stimulus and b) how they might actually announce that without kicking off a fire of Yen strength. Any usage of the word ‘normalization’ will likely grip markets attention, and this could lead into a prolonged move of Yen strength as markets prepare for an eventual tapering or exit from stimulus.

And that reason is just one of the many that this would not currently appear to be a highly probable scenario. More likely, the BoJ will try to avoid the topic altogether in order to garner more information around inflation in the coming months before making any decisions or announcements that might complicate their already difficult task of returning the Japanese economy to the elusive 2% inflation goal.

For traders looking to work with a continuation of Yen weakness, pairs like EUR/JPY and GBP/JPY can be attractive under the perspective trends of strength in both EUR and GBP may continue. On the other side of the Yen, if traders are looking to plot scenarios of Yen strength, USD/JPY can remain attractive, as the U.S. Dollar hasn’t yet shown much for signs of life so far in the New Year.

On the four-hour chart below, we’re looking at EUR/JPY. Short-term support is showing around the 135.00-handle, while short-term resistance is coming-in around 136.00. If we do get a pullback in the bullish trend around tomorrow’s BoJ rate decision, the area of 134.41 can be attractive for bullish continuation approaches, as this Fibonacci level gave three swing-highs in the 4th quarter of last year before bulls were finally above to break-above.

Are you looking for longer-term analysis on the Yen, Euro or GBP? Our DailyFX Forecasts for Q1 have a section for each major currency, and we also offer a plethora of resources on our USD/JPY, EUR/JPY and GBP/JPY pages. Traders can also stay up with near-term positioning via our IG Client Sentiment Indicator.