- This week brings a bevy of Central Bank rate decisions. We look into three of the more pertinent below.

- As we near the close of 2017, a number of bigger picture themes remain at question, key of which is the potential for U.S. Dollar strength as we move into next year.

As we stare down the end of a year that’s seen a surprising twist of events across the FX market, a bevy of Central Bank rate decisions populate this week’s calendar. The notable expectation revolves around the Federal Reserve, as the bank is widely expected to invoke a third interest rate hike this year at their meeting on Wednesday. But, that is not to mean that this is the only event of relevance: As 2017 has illustrated over and over again, risk, and volatility have a tendency to care little about what market participants are expecting. Below, we look at the high points of this week’s outlay in order to best approximate where attention should be paid.

The U.S. Dollar: FOMC is on Wednesday

This Wednesday’s rate hike has been baked-in for some time now. CME Fedwatch continues to show a 100% probability of a move later this week, and there’s even a growing expectation for a double quarter-point move of 50 basis points.

Given the Fed’s recent history, and also taken with the fact that Fed Chair Janet Yellen will soon be stepping down from the top post at the bank, and we likely won’t see such a move. The Fed’s aim of transparency and openness would very much be at question should the bank try to sneak in another 25 basis points; and for a period in which we’re going to see transition atop the bank, this would be an inopportune time to make such a gesture.

Instead, the focus will likely be on the bank’s tolerance towards rate hikes for next year. As balance sheet reduction continues to ramp-up, the Fed is already tightening the money supply by buying fewer bonds each month and allowing a larger portion of securities to ‘roll-off’ the balance sheet. But – the Fed has remained persistently hawkish this year, and the U.S. Dollar has just continued to sell-off.

As we near Wednesday’s meeting, the Dollar remains in bearish state as it has for much of 2017. From January to September, DXY had lost as much as -12.3%; and this is in a year when few other Central Banks are looking at tighter policy options. After setting a fresh low in September, the Dollar has given the appearance that it’s trying to reverse course; continually ramming into a key zone of resistance that runs from 94.08-94.30. We even had a two week period where this zone operated as a semblance of support: But that hope could not hold and sellers just came right-back into the Dollar to punch prices-lower: 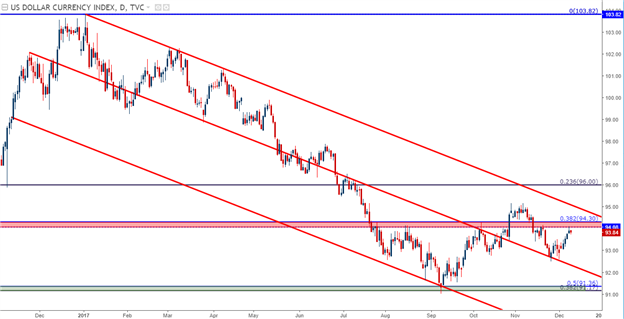 The bigger question here is whether this year’s bearish move is a pullback in a longer-term bullish theme; or whether this is the start of ‘something new’ that may last into the next few years. Looking at longer-term charts, there’s really a case to be made on either side.

This story of Dollar strength really started back in 2014. This is far before any rate hikes out of the Fed; but as the bank was starting to taper QE and look towards the end of stimulus, market participants weren’t prepared to wait around before starting to price that in. U.S. Dollar strength started to show vividly in the summer of 2014, and this raged all the way into spring of 2015. This amounted to a whopping 27.2% gain in the Greenback and this was almost a full year before the Fed would kick rates-higher. As we spent most of 2015 and the first ten months of 2016 bantering about potential rate hikes; seeing the Fed only pose one actual adjustment, the U.S. Dollar remained in a rather violent range, oscillating between 93.00 and 100.00 for almost 20 full months until another driver availed itself in November of last year. ‘The Trump Trade’ drove prices in the U.S. Dollar to fresh 14-year highs, and as we came into this year, the stage was set for a runaway bout of USD-strength. This began to falter just weeks after the open of the New Year and, by March, we were already in a down-trend.

U.S. Dollar via ‘DXY’ Weekly: Dollar-Strength Story Back to Summer, 2014 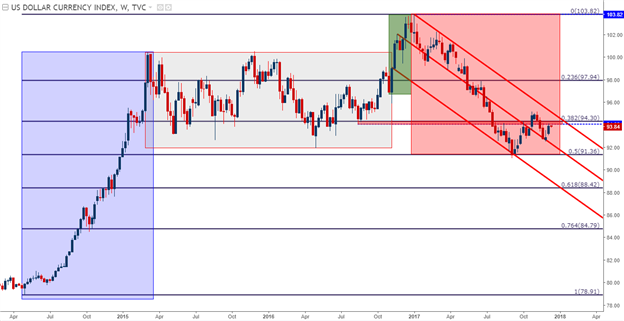 The above story is at least partially related to this one. Rapid anticipation of tighter U.S. policy wasn’t the only factor at play when USD kicked-on that bullish run in 2014 that lasted into 2015; as we also had an oncoming ECB stimulus policy that was getting priced-in to global markets. Given the heavy allocation of the Euro in the value of the Dollar index via DXY, the favored USD-vehicle across global markets; and this starts to make much more sense. The Euro takes up a roughly 57.6% allocation in DXY, so if the Euro is pervasively weak we’ll often see some semblance of strength show in the U.S. Dollar.

Mario Draghi first teased the prospect of a European stimulus program in May of 2014, and at the time EUR/USD had just set resistance at 1.3993. The formal announcement of an ECB stimulus program came in July of that year, and by March of 2015 EUR/USD had already cracked-below the 1.0500 psychological level. This was a move of 26.1% from May, 2014 to March, 2015 (section in red, below).

EUR/USD Weekly: Strength Shows in 2017 After Three Years of Pain in the Euro 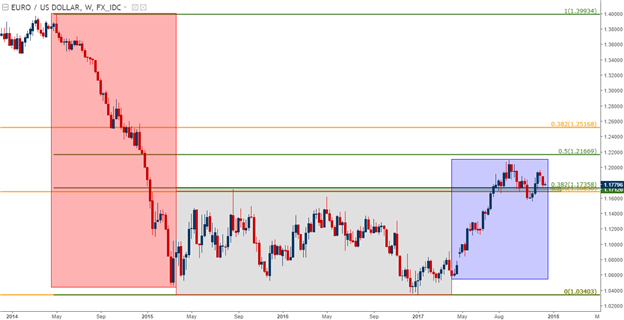 After the ECB’s QE program actually began in March of 2015, EUR/USD started on a range that lasted for the next two years. For the duration of that period, the pair continued to oscillate between the 1.0400 and 1.1500 levels on the chart, very similar to what was seen in the U.S. Dollar as we waded through that first rate hike in over nine years out of the Federal Reserve.

This theme began to shift in April of this year. After the first round of French elections resolved with a rather market-friendly outcome, Euro bulls showed up and took control of the situation for the next six months. This drove EUR/USD above the vaulted 1.2000 level, albeit temporarily. This happened in a backdrop in which the Fed has remained persistently hawkish, continuing to say that they’re looking to hike rates in the effort of further normalizing policy. Meanwhile – the ECB has continued to remain dovish, even electing to extend their QE program at their most recent rate decision in March.

This dovish move dented that bullish trend; but bulls could only stay at bay for a few weeks before rushing back in to the long side of the trade. In mid-November, a red-hot German GDP report indicated that Europe is actually going to grow faster than the United States this year. And this is in an environment in which the Fed has hiked four times with a very likely fifth on the way for Wednesday, and the ECB has remained loose and dovish throughout.

If the global growth story of 2017 is to continue into next year, the ECB might have some catching up to do, and this is a key driver in the bullish Euro theme that we’ve seen price-in throughout this year. 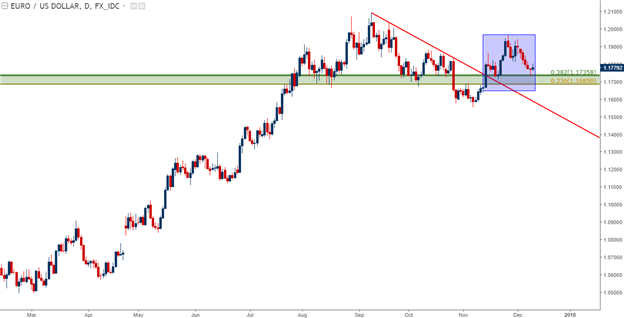 The British Pound has seen a rather active 2017, and we’re not through just yet. The Bank of England hosts a rate decision on Thursday, and given that the bank just kicked-up rates combined with the fact that this is not a Super Thursday event – and we likely won’t see too much by way of new information here. So, as has become usual for these non-Super Thursday events, the focus will be on the details in the effort of seeing whether any near-term rate adjustments might be in the cards at the BoE.

Before we get to that – we have an inflation report set to be released tomorrow, and this will likely steal the attention of Pound traders in the early portion of the week.

Inflation is the 800 lb. gorilla in the room of the British economy right now. It’s higher than the BoE wants, and this is what brought in last month’s rate hike. The BoE remains extremely cautious around Brexit, after having admitted at multiple points in the year that the slowdown that they were expecting after the referendum just hasn’t shown up in the way that they thought it would.

Nonetheless, the BoE remains cautious – even whilst hiking rates in the effort of stemming-off inflation. October’s inflation hit 3%, a full 100 basis points beyond the bank’s targets. This required BoE Governor Mark Carney to write a letter to the Chancellor to explain why this has happened, and less than a month after that print we got the first Mark Carney-led rate hike out of the Bank of England. But – this was hardly a bullish thing, as Mr. Carney continued to transmit a dovish tone that gave very little hope for any additional moves in the near-future. This helped to drive the value of GBP-lower, even while the BoE was hiking rates; and that weakness stayed for most of the month, with resistance continuing to show at the Fibonacci level of 1.3320.

In latter-November, a bit of clarity began to show on the Brexit-front. This led to fresh highs in GBP, and after a support-check at prior resistance on Thursday of last week, the door remains cautiously open to bullish continuation strategies as we near tomorrow’s UK inflation report.