GBP/USD Technical Analysis: Plotting Around the Pull Back

- The British Pound is pulling back after the recent bullish breakout.

- Retail traders remain slightly net-short, with 1.08 traders short for every one long, as of this writing.

In our last article, we looked at what had been a messy prior month in the British Pound as GBP/USD attempted to find a direction. Coming into September, Sterling was strong as Mark Carney had warned that rate hikes may be on the horizon in order to temper the aggressive inflation that’s started to show in the U.K. This led to a bullish spike that eventually created a fresh one-year high in the pair at 1.3658. But, in the wake of that bullish breakout, Mark Carney started to pump on the brakes, warning that rate hikes would be gradual and slow, as the BoE continued to expect Brexit to be a hindrance for the British economy.

This brought price action down to a key support level at 1.3478, which is the 50% retracement of the ‘Brexit move’ in GBP/USD. We discussed this level in mid-September, and support held there for a little over a week before bears finally began to take-over again. That pull back lasted all the way until 1.3026, at which point the messy range began to build, shown below in grey; and this held for almost two full months, including through the BoE rate hike in early-November. 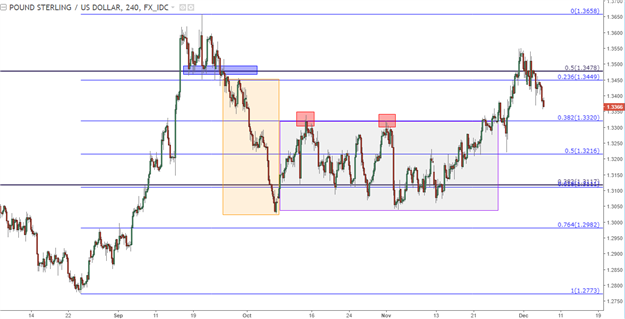 The instigator of this recent breakout appears to be progress in Brexit discussions between the U.K. and EU. This began to show about two weeks ago, and prices finally were able to break above the 1.3320 Fibonacci level that had twice reversed bullish advances (highlighted in red above). Strength continued to drive the pair-higher, and we eventually re-eclipsed that Fibonacci level at 1.3478; but just as we saw in September, bulls were unable to hold the move and a deeper retracement has developed.

At this point, the 2017 trend in GBP/USD remains bullish, and the near-term trend on the hourly has bullish connotations, as well. The current challenge would be finding an adequate level of support in the shorter-term move in order to position in to the longer-term theme. One price of relevance that may be soon be in the cards is that prior area of resistance at 1.3320. This is the 38.2% retracement of the bullish theme from August-September, and we’ve seen quite a few relevant inflections around this level. Support showing at this price opens the door for bullish plays; and the 50% retracement of that same move at 1.3216 can be attractive for stop placement on bullish positions. This would also enable an approximate 1-to-1.5 risk-reward ratio by taking profits at that prior point of support around 1.3478; and if a 1.3500 break or a test of the prior high at 1.3658 is in the cards, that risk-reward ratio could become considerably more attractive.

GBP/USD Four-Hour: Support Potential at Prior Resistance for Bullish Continuation 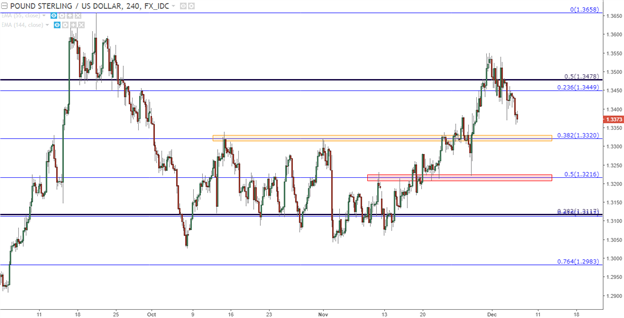