- Core Rate of Inflation to Narrow from Fastest Pace of Growth Since June 2014.

The U.K.’s Consumer Price Index (CPI) may spark a limited reaction as the headline is projected to hold steady at an annualized 2.3%, but a downtick in the core rate of inflation may weigh on GBP/USD as it encourages the Bank of England (BoE) to preserve a wait-and-see approach for monetary policy.

Despite the 8 to 1 split in March, the majority of the Monetary Policy Committee (MPC) may try to buy more time as the U.K. officially starts its departure from the European Union (EU), and Governor Mark Carney may continue to tame interest-rate expectations as officials reiterate ‘monetary policy can respond, in either direction.’ However, another stronger-than-expected CPI print may push the BoE to change its tune as the central bank pledges ‘there are limits to the extent that above-target inflation can be tolerated,’ and the committee may show a greater willingness to move away from its easing-cycle as official warn ‘some modest withdrawal of monetary stimulus over the course of the forecast period remains appropriate.’

Waning confidence accompanied by the ongoing weakness in household earnings may drag on price growth, and a marked slowdown in the core rate of inflation may produce a bearish reaction in the British Pound as it drags on interest-rate expectations.

Nevertheless, U.K. firms may boost consumer prices amid the pickup in private-sector consumption, and the pound-dollar exchange rate may stage a near-term rebound should the inflation report continue to exceed market forecasts. 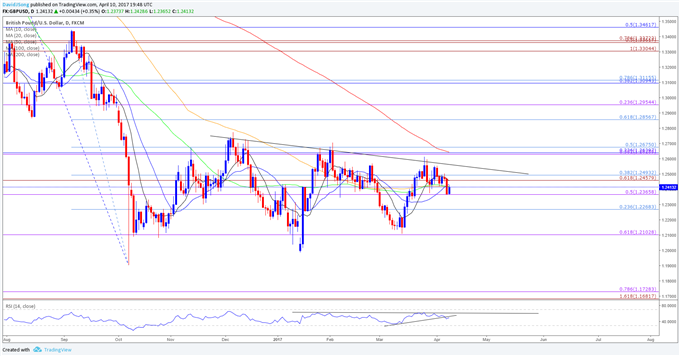 The headline reading for U.K. inflation climbed an annualized 2.3% in February to mark the fastest pace of growth since 2013, with the core Consumer Price Index (CPI) also exceeding market expectations as the reading increased 2.0% per annum amid forecasts for a 1.7% print. A deeper look at the report showed rising energy costs fueling higher transportation costs, with prices for food & beverages climbing 0.9% during the same period, while prices for clothing & footwear narrowed 0.1% after holding flat in January. The British Pound gained ground following the inflation report, with GBP/USD climbing above the 1.2450 region to end the day at 1.2478.

Silver Price: Damage Has Been Done, Lower Prices Ahead