The British Pound’s strong performance at the start of 2021 was derailed in recent weeks, thanks in part to concerns around potential slowdowns in vaccine supplies and thus vaccination rates. Alas, thanks to stability in UK Gilt yields – experiencing less downside than some of their developed market counterparts – the British Pound remains fundamentally well-positioned, all-in-all.

The technical side of the equation has started to reflect the changing fundamentals too. Indeed, price action through the turn of April suggests that better days may be ahead. Both GBP/CAD and GBP/NZD made meaningful technical reversals on Monday, while GBP/AUD continue to elevate itself away from recent range support. 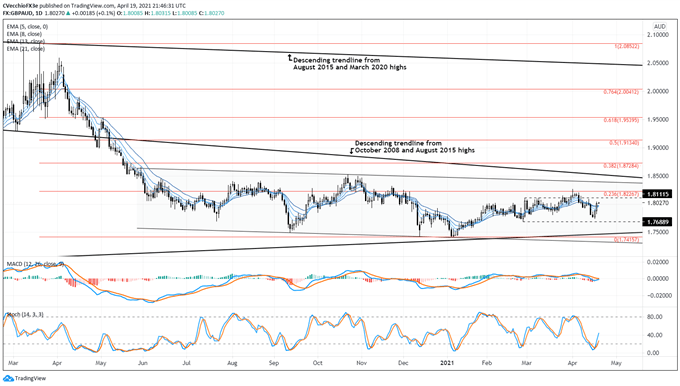 GBP/AUD has remained stable since early-March, barely breaking the February high (1.8112) for a few days while never cracking the February low (1.7689). And while the trendless price action continues, a series of ‘higher highs and higher lows’ has been carved out in January, February, and now April. Yet it is also true that the pair failed to break through the 23.6% Fibonacci retracement of the 2020 high/2021 low range at 1.8227; retrospectively, the area around 1.8327 has proved resistance since November 2020.

Given that GBP/AUD remains trapped in a slightly descending parallel channel dating back to late-May 2020, it still holds that “the pair looks destined to stay rangebound for the foreseeable future; better opportunities may arise elsewhere among GBP-crosses in the next week.” 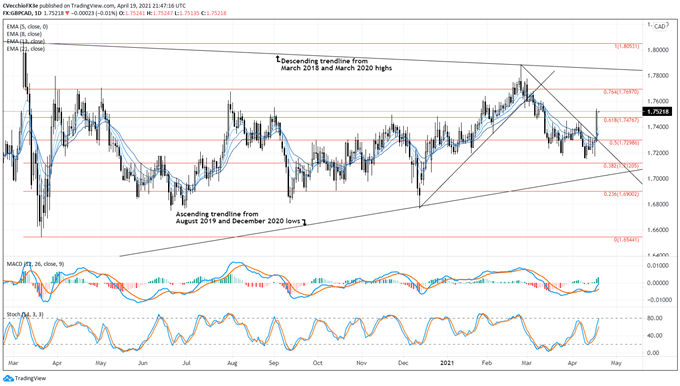 GBP/CAD is once again the most active commodity currency GBP-crosses, having vigorously broken through the downtrend from the late-February and early-April swing highs, all the while clearing out the 61.8% Fibonacci retracement (1.7477) to the topside. Bullish momentum is beginning to quickly gather pace. GBP/CAD rates are above their daily 5-, 8-, 13-, and 21-EMA envelope, which is now in bullish sequential order. Daily Slow Stochastics have abruptly reached overbought territory, while daily MACD has started to edge above its signal line. A move above the 61.8% retracement increases the odds of a steeper rally towards the 76.4% retracement at 1.7697 (before an attempt at the yearly high once more). 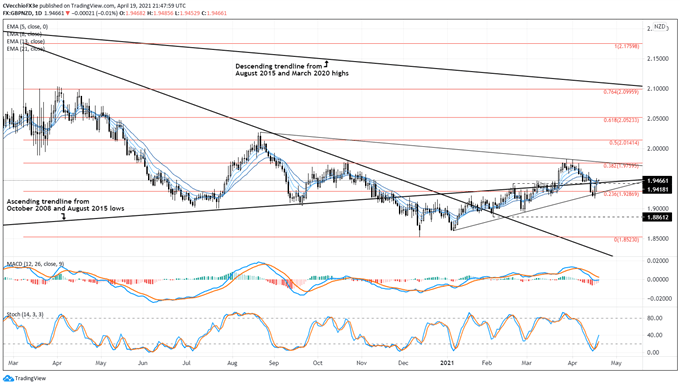 GBP/NZD’s price action at the end of last week resolve itself in a daily bullish key reversal on Friday, setting up a rebound from the rising trendline from the January and March swing lows – yearly uptrend support, in effect. The pair also was able to carve out support near the 23.6% Fibonacci retracement of the 2020 high/2021 low range at 1.9287, all the while retaking the ascending trendline from the October 2008 and August 2015 lows. It may be the case that a more significant rally will emerge through the remainder of the month towards the 38.2% retracement at 1.9760; a breach of this level would also constitute a break of potential symmetrical triangle resistance dating back to the August 2020 swing high.