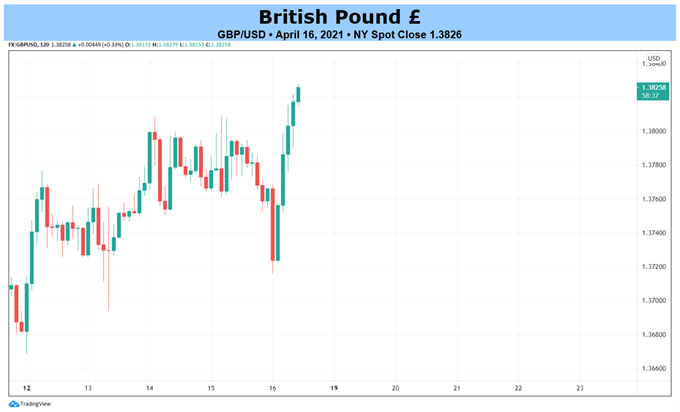 At the start of the month, it was observed that “even as some concerns arise about vaccination supplies due to shifts in EU export policy, the UK economy appears to remain on track to return to its pre-pandemic output faster than most other developed economies.” Two-plus weeks later, the risk that this concern to the UK economy – and thus, the British Pound – has been realized. As UK vaccination rates have slowed, coupled with a backdrop of calmed UK Gilt yields, the British Pound’s relative appeal that carried it through the first three months of 2021 has been tarnished. 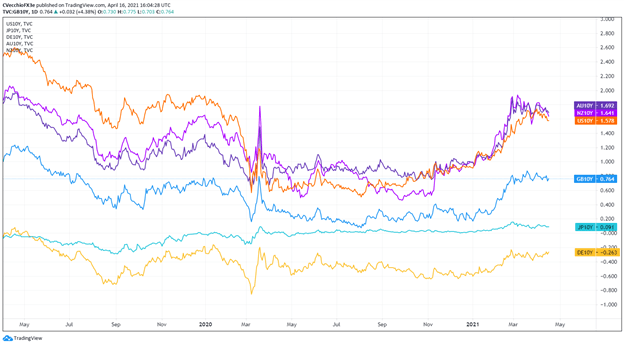 Holding back the British Pound thus far has been a small but meaningful shift in interest rate differentials that support recent strength in EUR/GBP and weakness in pairs like GBP/JPY and GBP/USD. But it’s worth noting that the UK Gilt 10-year yield’s decline has been circumspect relative to some of its counterparts, suggesting that, once the near-term vaccination supply issues subside, the British Pound may be well-positioned to continue its climb.

The calendar’s turn through the middle of April brings about a supersatured docket for the UK economy; there’s certainly an argument to be made that there will be more event-driven risk in the week ahead than what GBP-crosses have experienced thus far this month.

The BOE has been on the sidelines since mid-March and is unlikely to be a significant factor soon with the next meeting scheduled for May 6. But BOE Governor Bailey is speaking in the coming days, and like any time that a central bank head speaks, market participants are likely to pay attention. But like many of his counterparts at other central banks, particularly the European Central Bank and the Federal Reserve, BOE Governor Bailey is unlikely to stray from the script of ‘low rates until the pandemic is over.’ 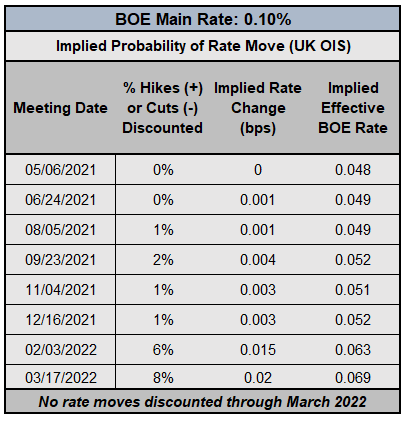 Rates markets continue to take BOE policymakers at their word that interest aren’t going anywhere any time soon, nor will the main rate move into negative territory. According to overnight index swaps, there is only a 1% chance of a 25-bps rate hike in 2021, and there is an equally meager 8% chance of a hike through March 2022.