Euro versus Commodity Currencies is a Mixed Picture

The Euro has been underperforming the rest of the majors through the first three-plus months of 2021, but it has the good fortune of running into a strong seasonal tailwind that has been producing one of the best trading months of the year for the single currency versus the greenback. But it’s not just the Euro that has been faring well versus the US Dollar: it’s typically a good month for the commodity currencies as well.

As such, it’s necessary to dissect individual EUR-crosses rather than taking a presumptive broad brush stroke. While some stability has been found in EUR/AUD (symmetrical triangle) and EUR/NZD (broken downtrend, holding multiyear support), EUR/CAD is already in process of falling towards long-term trendline support. Indeed, taking a longer-term view suggests that the trio of Euro/commodity currency crosses may simply be biding their time before continuing their year-long downtrends. 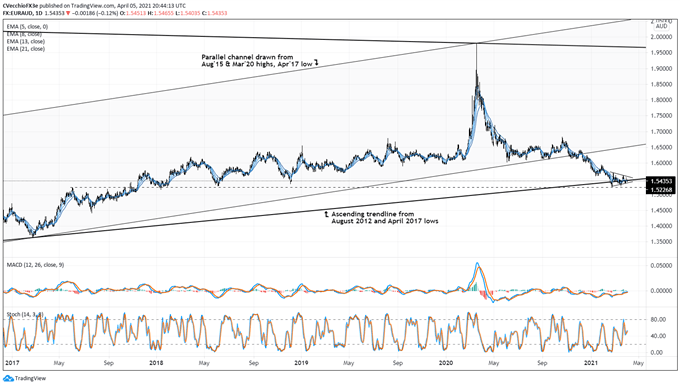 The decline experienced by EUR/AUD rates has slowed in recent weeks, although significant technical damage remains. Having already lost the parallel rising channel as measured from the August 2015 and March 2020 highs against the April 2017 low, EUR/AUD has consolidated into a short-term symmetrical triangle right at the ascending trendline from the August 2012 and April 2017 lows. In context of the preceding trend, resolution is sought to the downside. A drop below the June 2017 at 1.5227 would mark new lows for 2021 as well a meaningful psychological breakdown (given its previous efforts as support in early-2018). 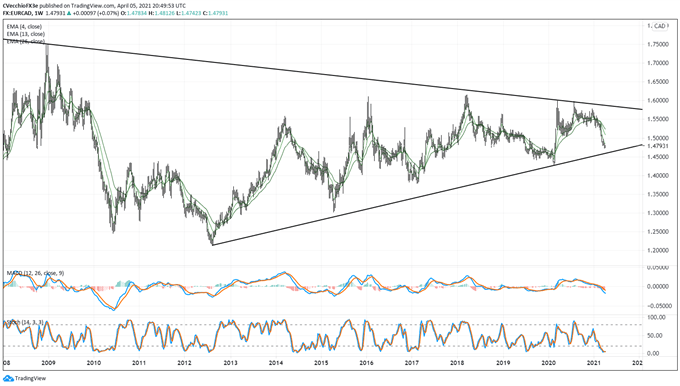 Taking a step back to the weekly timeframe for EUR/CAD rates, it’s evident that bearish momentum remains firmly in place. The pair remains below its weekly 4-, 8-, and 13-EMA envelope, which is in bearish sequential order. Weekly MACD continues to drop while in bearish territory, and weekly Slow Stochastics are holding in oversold territory.

But EUR/CAD has not yet reached ascending trendline support from the August 2012 and February 2020 lows, which comes closer to 1.4650/700 this month. That’s not to say that EUR/CAD rates are due to breakdown further from there; the pair has been consolidating in a multidecade symmetrical triangle dating back to the December 2008 and March 2020 highs, which in reality can be drawn even further back to the implied EUR/CAD rate at the March 1995 high. 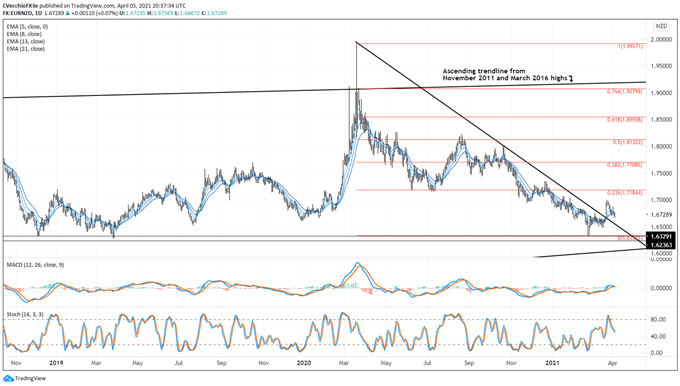 EUR/NZD rates have perhaps the ‘most bullish’ setup among the three EUR-crosses listed here, but that doesn’t mean all is sanguine. In fact, despite breaking the downtrend from the March and September 2020 highs, EUR/NZD has not been able to clear the 23.6% Fibonacci retracement of its 2020 high/2021 low range at 1.7184. That’s to say that the recent rally is unconvincing and may be more or less a ‘dead cat bounce.’ A return back to the yearly low at 1.6332 is not out of the question; the area between 1.6235/330 has been support for multiple years, and a break through said area would constitute a material technical change in pace.