The Euro, the best performing major currency since mid-May, just capped off its best monthly performance since September 2010. EUR/USD rates posted gains north of +4% for the first time since March 2016, while EUR/JPY rates gained the most since June 2017. But the past few days, particularly around the end of the month, have seen the Euro rally slow, if not hit the brakes. The forex economic calendar over the coming days may help reinforce the prevailing trend in recent weeks.

…Will Data Reinforce or Buck Narrative?

As is typical during the first week of a new month, the forex economic calendar is saturated with significant event risk. While the Euro does not have a central bank meeting on its agenda over the coming days (unlike the Australian Dollar or the British Pound), incoming PMI data should continue to point to a recovery gathering pace in the Eurozone.

In the world of FX, everything is about relativity; and while the UK PMI figures are likely to outpace those in the Eurozone (perhaps helping explain the recent pullback in EUR/GBP rates; the UK economy is growing relatively faster than the EU), the Eurozone PMIs are set to continue to outpace those coming from the United States. 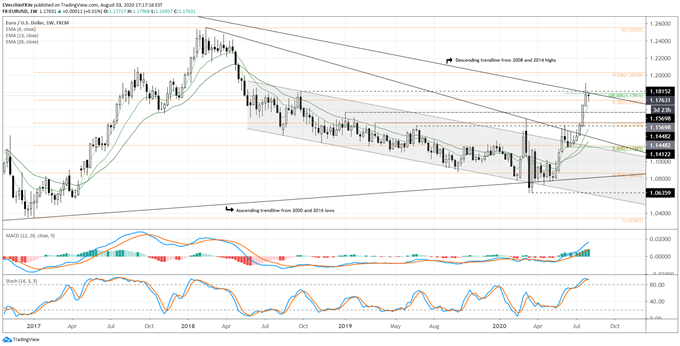 EUR/USD rates have hit significant near-term resistance, a zone that holds several important levels that could ultimately dictate a pause in the recent run higher. The 38.2% retracement of the 2017 low/2018 high range comes in at 1.1709 (as indicated by the orange Fibs in Charts 1 & 2). Taking the move from the European Recovery Fund announcement date in May, to the June high and to the June low (within the symmetrical triangle), and the 100% Fibonacci extension (as indicated by the green Fibs in Charts 1 & 2) comes in at 1.1791.

Furthermore, the descending trendline from the 2008 and 2014 highs is nearby at 1.1800. A breakout through this zone (roughly 1.1709 to 1.1800) would be a significant long-term bullish development for EUR/USD rates. EUR/USD rates are above their weekly 4-, 13, and 26-EMA envelope, while weekly MACD is pushing higher and Slow Stochastics are lingering in overbought territory. 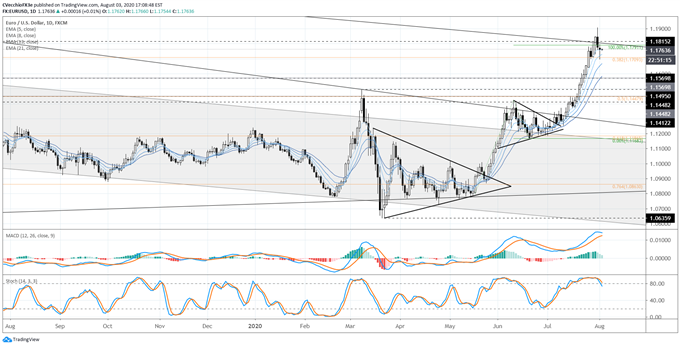 It is worth noting that EUR/USD rates are holding below resistance in the form of the long-term trend from all-time highs, trapped between the 100% Fibonacci extension (1.1791) and the 38.2% Fibonacci retracement (1.1709). It still holds that this is a successful breakout from the multi-year downtrend originating at the February 2018 highs.

At present time, EUR/USD rates are holding above their daily 5-, 8-, 13-, and 21-EMA envelope (which is still in bullish sequential order). Daily MACD, while cooling off, is still in bullish territory, and Slow Stochastics are starting to pullback from overbought territory – but without a subsequent pullback in price. Bullish momentum has been firm, and a pause does not mean that the uptrend is finished. 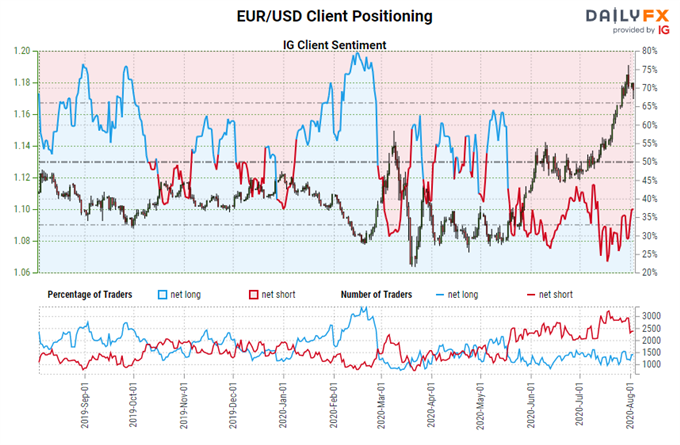 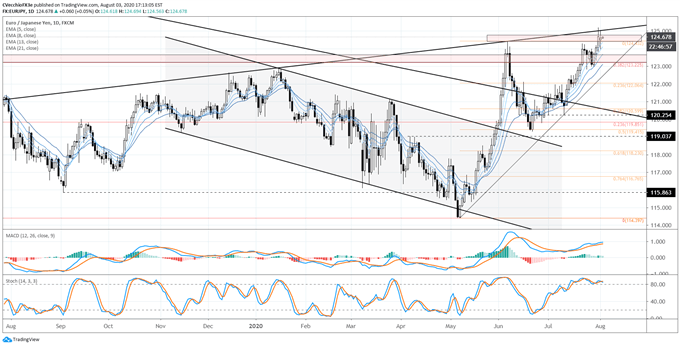 EUR/JPY rates have proven stronger than EUR/USD rates in recent days, thanks in part to the snapback in USD/JPY rates higher. The EUR/JPY rally has carried price back through a significant area of interest in recent years, between 123.65 and 123.88, an area that proved to cap price action during the EUR/JPY rally in late-May/early-June. Now, EUR/JPY rates are finding resistance around the June swing high, and the uptrend from September 2012, September 2016, and January 2019 swing lows.

EUR/JPY rates have risen above their daily 5-, 8-, 13-, and 21-EMAs, which remains in bullish sequential order. Daily MACD’s rise in bullish territory has resumed, while Slow Stochastics are holding in overbought territory. A double top may no longer be forming in EUR/JPY rates; a break above 125.50 would constitute a significant bullish development. 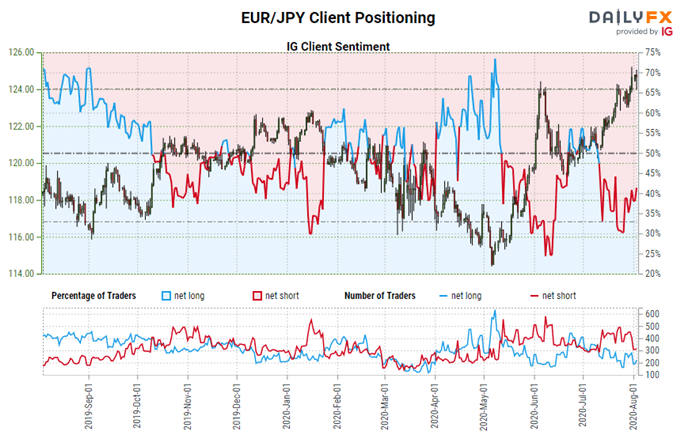