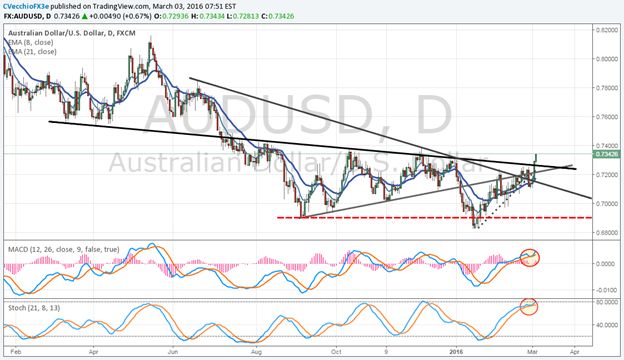 - Decline in short-term volatility a harbinger for higher stocks?

In psychology, the "recency bias" is defined as the "tendency to think that recently observed trends and patterns will continue into the future." In behavioral economics - investing and finance at writ large - the recency bias plays out as "market participants expecting their recent portfolio returns to indicate future performance." For traders intent on keeping their capital preserved over the long-term, this is a very important cognitive bias to avoid: you must be flexible enough to change your view in the short-term if the market moves against you. Of course, this is just one facet discussed in the "Traits of Successful Traders" series.

This is an important point to internalize as we examine currents across asset classes. While the news cycle by and large remains exceptionally negative - the headlines continue to be bombarded by concerns over 'Brexit,' Iran and the Gulf Arab States, and Donald Trump. You'd be led to believe that the world as we know it is on the cusp of ending.

Markets are telling a different story.

There have been a number of technical developments in recent days that warrant attention, which could have significant implications over the short-term, at least in the run-up to the European Central Bank's March 10 meeting and the Federal Reserve's March 16 meeting. On the FX side of things, AUD/USD is arguably the chart of the day:

AUD/USD is making a number of bullish technical strides at the moment. From a momentum basis, the environment is quite positive: price is holding above both the daily 8- and 21-EMAs; and both daily MACD and Stochastics are trending higher in positive territory.

On a more structural basis, the downtrend from the June and December 2015 highs has been broken, as has the former support turned resistance from the March 2015 lows through the highs in December 2015.The breakdown through the early-2016 low through the August 2015 swing lows seems like a false move. The probability of a significant bottom developing would be significantly increased should price put in a weekly close through $0.7400.

It's not just AUD/USD, though. Both Gold and Crude Oil are threatening further gains, if it's Gold's symmetrical triangle on the outskirts of its 2013-2016 down channel (chart 2) or Crude Oil's attempt to work through an expanding wedge/bullish falling wedge off the lows (chart 3). 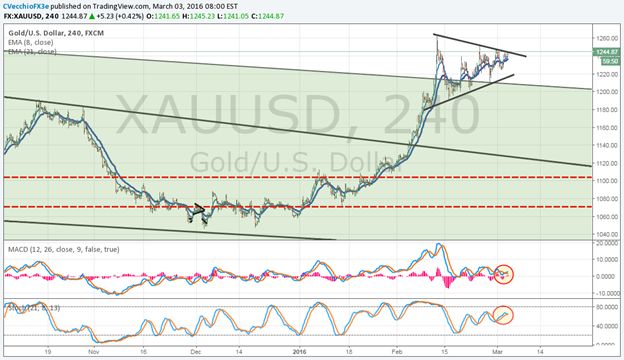 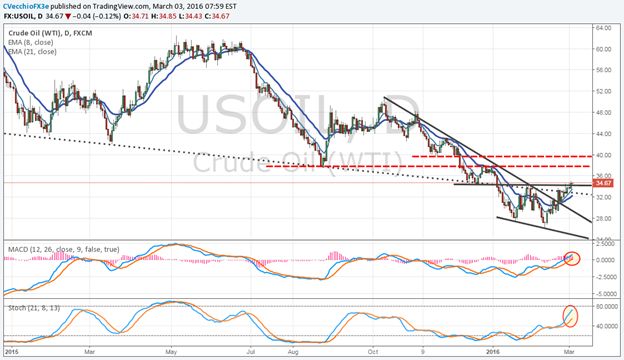 See the above video for an expanded discussion on recent developments pertaining to central banks as well as for technical considerations in AUD/USD, CAD/JPY, Crude Oil, Gold, S&P500 (SPX500), EUR/USD, and the USDOLLAR Index.