It's the first day of the last month of the quarter, and if you think overall direction in markets has been lacking, we can all agree on one thing: higher volatility has flourished as the perception that central banks are losing control has spread.

Why does this matter?- central banks in the majority of developed economies (US, UK, EZ, and Japan; Canada is the exception now) are the last credible policy institutions in town as fiscal authorities flounder. Fiscal policymakers have taken their ball, gone home, and stayed there for a number of years, refusing to play with the other kids in the neighborhood, if you will.

Accordingly, with the next saga in the depressingly co-dependent relationship between markets and central banks gets set to unfold, traders are likely to keep their focus on the two major central bank meetings this month: the European Central Bank on March 10; and the Federal Reserve on March 16. Both central banks will be releasing revisions to their respective staff forecasts and economic projections, implicitly and explicitly outlining the path of future policies.

Over the next week-plus, while there are a number of significant economic data due, market participants will likely view everything from the central bank-centric point of view; that is, everything will be filtered through the lens of 'will this impact the ECB's easing prospects or the Fed's hike timeline?' Likewise, this probably means that March seasonality trends in both EUR-crosses and USD-pairs will only begin to exert their influence after mid-month.

In the meanwhile, perhaps the most interesting chart splashing across screens this morning is the daily Crude Oil chart (my interpretation seen below in chart 1). The potential for a bottom in Crude Oil exists, even if it's only in the short-term, even if it only leads to prices returning back to $40 from these levels (that would still be a move around +15%). 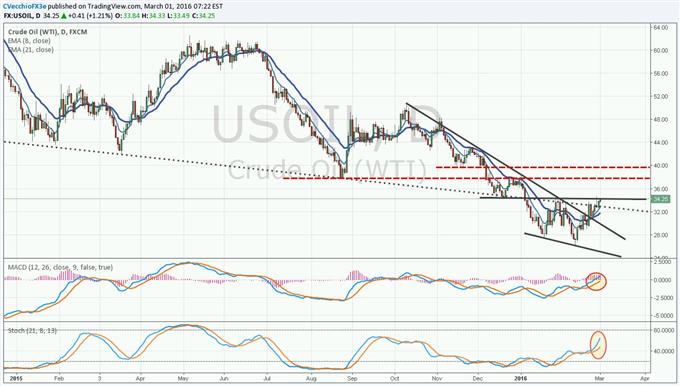 The implications of a short-term bottom in Crude Oil is clearest in the CAD-crosses, which are outlined and discussed in the video above. The relationship between Crude Oil and the Canadian Dollar remains very strong - in fact, the 60-day rolling correlation between CAD/USD (inverse USD/CAD) and Crude Oil is a statistically significant +0.67 (see chart 2 below).

We first outlined the potential for a turn in the Canadian Dollar in our January 22 article, "Oil Collapse Driven by Panic; Is CAD at a Policy Turning Point?" and for both short EUR/CAD and short GBP/CAD in the February 18 article, "Decision Time for Risk, USD-pairs; CAD-crosses at Inflection Points." 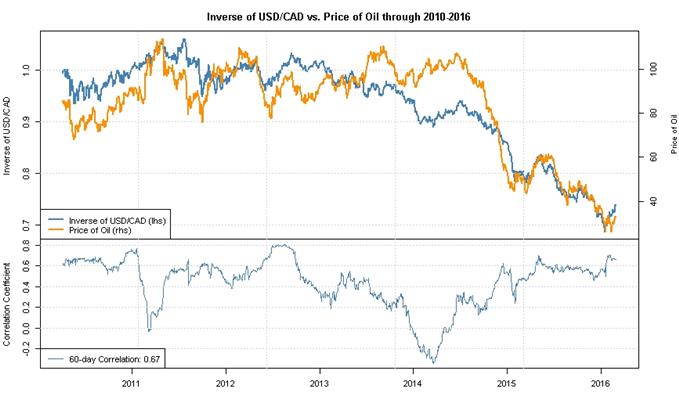 See the above video for an expanded discussion on the fundamental expectations for the ECB;s March 10 meeting, the Fed's March 16 meeting, and for the 'Brexit' saga, as well as for technical considerations in EUR/CAD, GBP/CAD, EUR/USD, GBP/USD, GBP/JPY, and the USDOLLAR Index.