In this series we scale-back and look at the broader technical picture to gain a bit more perspective on where we are in trend. The Australian Dollar has already posted an impressive 8.6% range against the Japanese Yen just two days into the start of 2019 trade- keep in mind the entire 2017 range was just 14.8%. The recent collapse in price fueled a test (and brief stint below) a critical multi-year support range before rebounding sharply. It’s make-or-break into the close of the week. Here are the key targets & invalidation levels that matter on the AUD/JPY weekly chart to start the year. 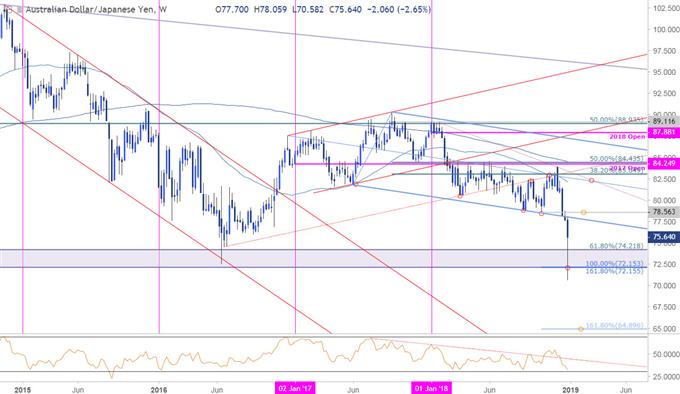 Notes: For nearly five-years we’ve been highlighting a critical support zone in AUD/JPY at 72.15-74.22- a region defined by the 1.618% of the 2013 decline and the key 61.8% retracement of the 2008 advance. Price has respected this critical pivot-zone as support since the 2009 breakout and despite a break below 2016 / 2017 pitchfork support, the broader short-bias may be vulnerable while above this threshold heading into January trade.

A weekly close below would risk substantial losses in price with such a scenario targeting longer-term measured targets at 64.90. Initials resistance now stands with former pitchfork support (currently ~77.90s) backed by the October range lows at 78.56- a breach / close above this level is needed to suggest a more significant near-term low may be in place.

Bottom line:The AUD/JPY collapse seen over the past few weeks has now tested & responded to a major multi-year support pivot and a close below is needed to keep the broader short-bias viable. This week already marks the largest weekly range since June 2016 (the yearly low was registered that week) and leaves the short-bias vulnerable into the start of the month while above 72.15. From a trading standpoint, a good spot to reduce short-exposure / lower protective stops. I’ll be on the lookout for possible price exhaustion on another attempt to break this key support zone. Expecting accelerated losses on a close below. 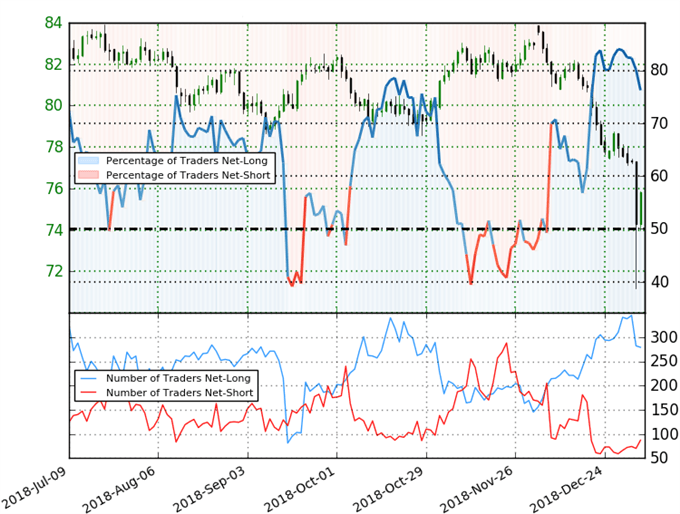