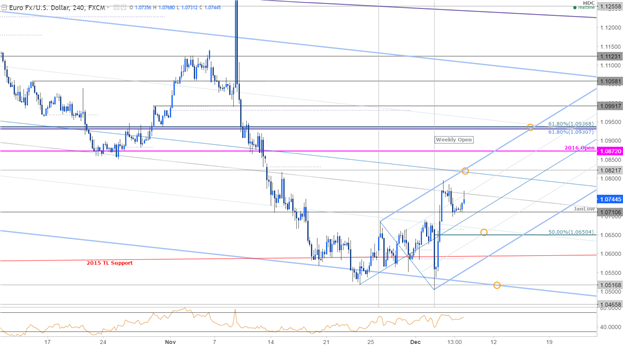 EUR/USD Volatility Ahead- Relief Rally Looks to ECB for Fuel

Technical Outlook: Therebound off the lower median-line parallel of a modified pitchfork formation dating back to the yearly highs shifts the focus higher in EURUSD with the advance eyeing a near-term resistance confluence just above the 1.08-figure. A newly identified median-line formation off the lows could be in play here but it’s too soon to rely on. That said, the immediate risk is for a pullback after tagging the upper parallel earlier in the week and we’ll be looking for a move lower to offer more favorable long-entries.

Interim support rests with the January low at 1.0711 backed by 1.0650/60 & the 1.06-handle – both areas of interest for exhaustion / long-entries. A breach above the March lows at 1.0821 is needed to keep the long-bias in focus targeting the 2016 open at 1.0872 & more significant resistance into 1.0931/37. It’s worth noting that from a seasonality perspective, December is a bullish month for EURUSD with the pair gaining in three of the past four years and five of the last eight overall.

Heading into tomorrow’s highly anticipated European Central Bank (ECB) rate decision, the risk remains weighted to the topside while within this near-term ascending formation. Although the Governing Council is expected to retain the zero interest rate policy, market participants are anticipating an extension to the QE program beyond March 2017 accompanied by an adjustment to the Capital Key (guidelines for asset purchases). 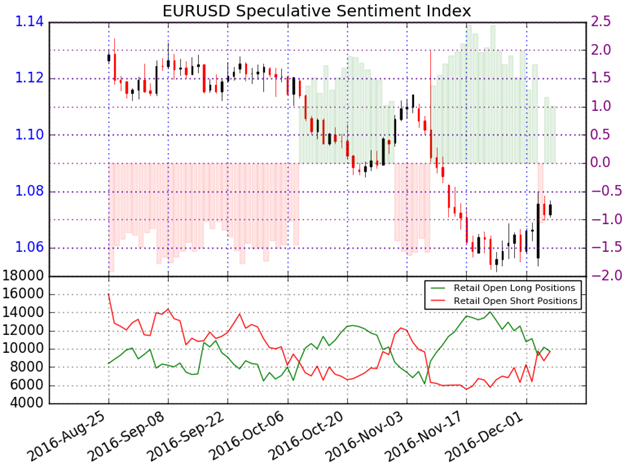