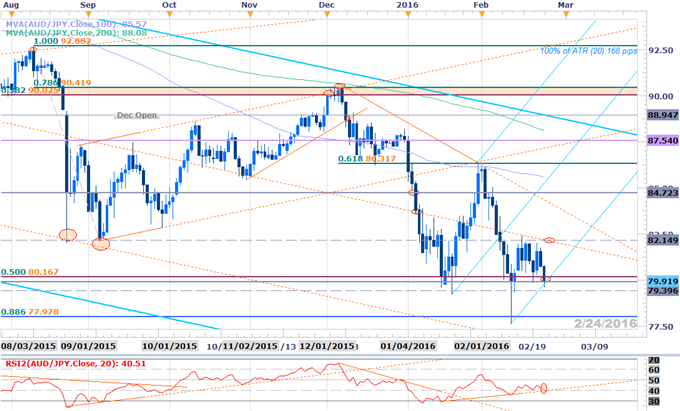 Technical Outlook: AUDJPY is trading into key support at the confluence of the lower median-line parallel extending off the lows & the low-day close at 79.88. The immediate short-bias is at risk here with resistance & near-term bearish invalidation eyed at 82.15 where a descending slope line converges on the 2015 close low. A breach above this mark looks for a more meaningful recovery targeting basic TL resistance extending off the December high. 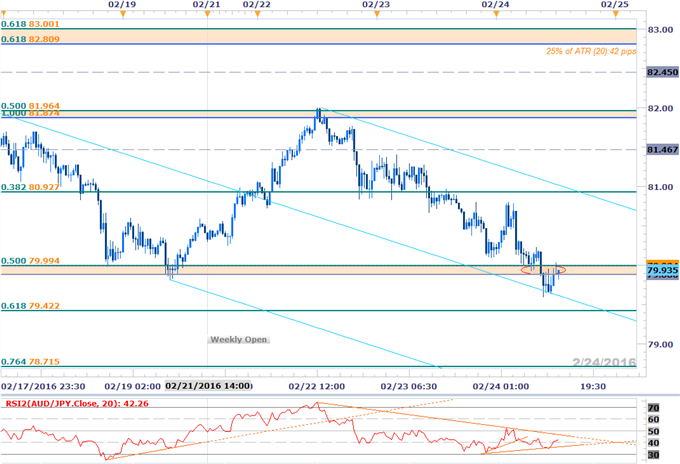 Notes: The pair has continued to trade wtihin the confines of a descending pitchfork off the 2/17 high with the exchange rate rebounding off the median-line in early U.S. trade today. Strong divergence into a resistancce RSI trigger-break has us holding longs with initial resistance seen at the confluence of the 38.2% retracement & the upper median-line parallel at 80.93. Subseqeunt resistance targets at 81.47 backed by the 81.87/96 resistasnce zone (bearish invalidation).

A break below this key area of support invalidates the recovery idea with such a scenario targeting THE 61.8% retracement at 7942, 7900,7871 and the 88.6% retracement of the advance off the 2012 advance at 77.98. A quarter of the daily average true range yields profit targets of 40-44pips per scalp. Added caution is warranted heading into the close of the week with Australia’s Private Capital Expenditure figures along with the second read on U.S. 4Q GDP likely to fuel increased volatility in Aussie crosses. At the same time, headlines coming out of the G20 Summit may also impact braoder market sentiment, offering further opportunities in risk sensitive pairs like AUDJPY.