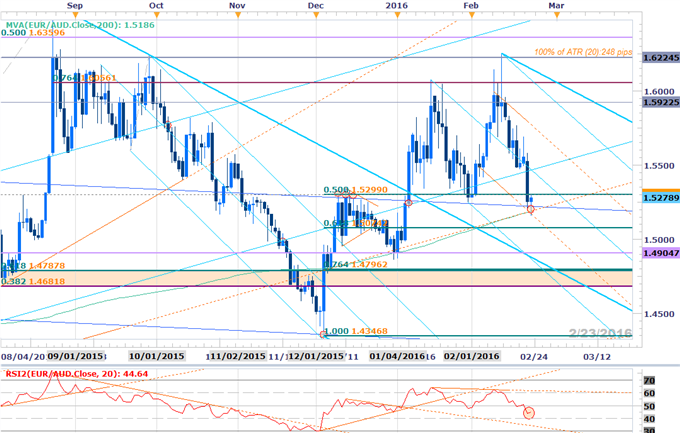 Technical Outlook: EURAUD is testing a key near-term support confluence at 1.5186 where the 200-day moving average converges on a sliding parallel extending off the 2015 low, the former upper median-line parallel of a structure dating back to 2014 and ’50-line’ of the lower half of the descending pitchfork (orange). The pair is at risk for a near-term recovery while above this threshold with near-term resistance eyed at the median-line (~1.5416) and the upper 50-line which converges on the 50% retracement of the decline at 1.5704. Keep in mind that ultimately we would be looking for a more meaningful recovery to offer favorable short entries higher up with the broader outlook weighted to the downside sub-1.5922. 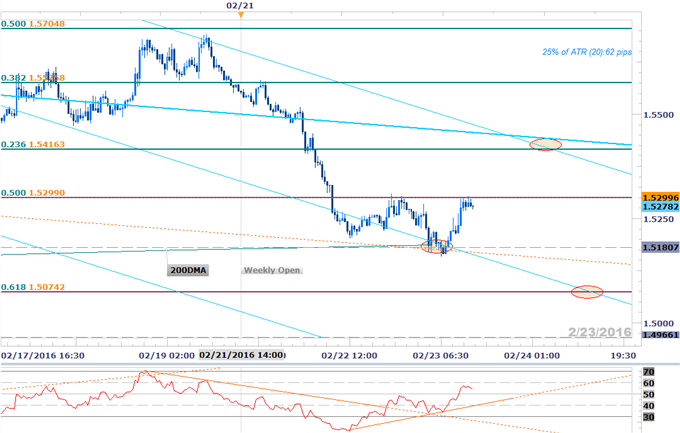 Notes: An embedded median-line formation off the monthly highs has also continued to guide this decline with today’s low marking clear divergence into a trigger break, shifting the near-term momentum profile to the long-side. Interim resistance being tested now at 1.5299 with a breach higher targeting more a more significant confluence at 1.5416 where a basic 23.6% retracement coverges a pair of median-lines. Subsequent resistance objectives eyed at 1.5576 and the 50% retracement at 1.5704.

A break of the lows targets invalidates our recovery play with such a scenario targeting the key 61.8% retracement of the December advance at 1.5074 backed by the 2016 open at 1.4905. Keep in mind this is a wide-range setup with a quarter of the daily average tru range yielding profit targets of 59-65pips per scalp. Event risk is rather light from for both respective countries and we’ll be largely watching broader event risk here as we head into the close of the final full week of February trade.