Crude Oil has traded lower from its highest level in 15-months that we saw yesterday on the third-largest inventory draw in 2016. Since Mid-September to yesterday’s new 2016 high, the price of Oil has risen by ~21.5%. A lot of the move has happened on the back of large inventory draws and supportive news from OPEC that may be organizing a production cut that could help to support the Oil market. Given the importance of a potential deal, we will likely continue to see volatility until the OPEC meeting next month in Vienna were the production cuts are distributed and agreed upon.

The anticipated cut is small overall, and many fear that any drop in Crude production from OPEC & Russia will invite the Shale producers to make up for slack, which may keep a lid on prices. However, as marginal revenue per barrel continues to climb, producers around the worlds are likely looking to bring as many rigs into action as needed so long as costs do not exceed revenue like we saw in the 2014 price drop.

Gold prices traded higher heading into Thursday’s ECB meeting, but the lack of QE guidance failed to boost demand. Oil fell roughly $8/oz. or ~.6% from two-week highs after the ECB meeting. On a macro picture, the strengthening US Dollar will likely be a headwind for the price of Gold. The major components of the DXY like GBP, EUR, & JPY are continuing to lose ground and currently sit on the bottom of a strong/weak index reading with US Dollar & AUD at the top of the leader board. The trailing 20-day correlation coefficient for XAU/USD & DXY is -.588, which shows a strong inverse price relationship.

Strong USD Could Continue To Be A headwind To XAUUSD

GOLD TECHNICAL ANALYSIS –The price of Gold is moving lower from the 38.2% retracement shown on the chart below. Today’s move lower also has Gold trading back below the 200-DMA at $1,267.47/oz. So far, it looks like the recent three-wave move higher (counter-trend rally) will fall shy of key resistance of the October 5 high of $1277.16/oz.

If USD strength gathers force, I would be on the watch for an extension lower that targets $1,246 to $1,230. We arrive at these targets by using the distance traveled in the first leg lower that began on Sept. 22 at $1,343/oz. Longer-term we would still be looking for a basing around $1,200/15 before being on the lookout for the start of an aggressive move higher. 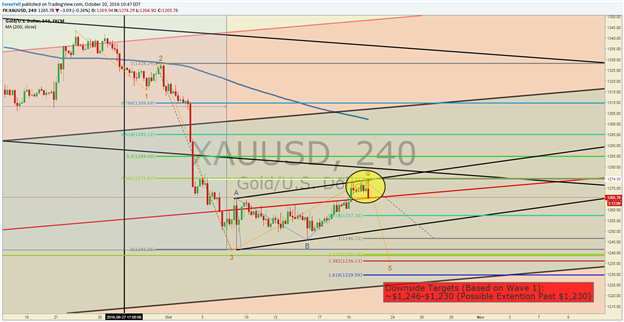 CRUDE OIL TECHNICAL ANALYSIS – The price of Crude Oil has declined on presumed profit taking and obvious USD strength after a disappointing ECB. We continue to trade below the ~$52/bbl level that would initiate the Bullish Head & Shoulder’s pattern that would target ~$78/bbl range. Our confidence in the move higher in recent notes has been based on the technical pattern of a consolidation triangle that tends to precede a breakout. That same triangle will now be watched to act as price support. The support levels from the multi-day triangle consolidation range from $49.70/17 per barrel.

Many will argue that Oil is overbought. Naturally, that tends to be the nature of bullish trends, and many stay overbought longer than counter-trend traders expect. We still maintain that this trend will be hard to fight as we retrace ~1.5XATR (5) from 15-month highs. Readers may remember how we shared that the 50-DMA crossed above the 100-DMA, which also occurred in April when Crude rallied ~20% before reaching the June 9 high at $51.64/bbl. When the crossover occurred, the price of Oil pulled back toward higher trend support before resuming the rally. While past performance is not indicative of future performance, keep an eye on a similar behavior to take hold in Crude.

As long as price holds above the H4 Ichimoku Cloud or even the Triangle zone of support, we will continue to prefer higher levels to lower.