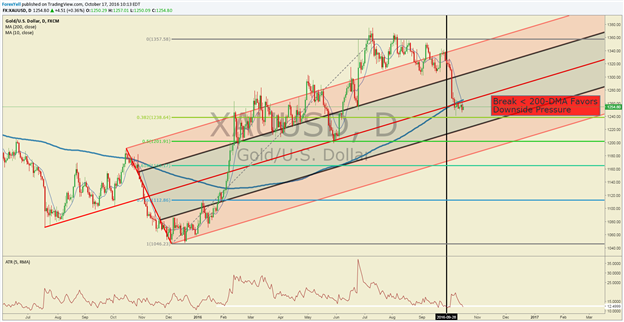 Crude Oil has fallen ~1% on Monday morning to trade below the $50/bbl handle. Friday's increase in Baker Hughest active rig counts in the U.S. added to oversupply concerns after Libya expanded output alongside Iran and Nigeria. The supply concerns are nothing new and point to the hope the market has for an OPEC deal to be reached.

After a wild few month in the Oil market, which sees the price of Crude within a whisper of 2016 highs, institutional speculators seem to be along for the ride. The big shifts we’re seeing in positioning seem to favor a breakout developing after OPEC agreed on Sept. 28 to limit production to an aggregate total of 32.5M down from ~33M. The agreement is expected to be finalized in November at Vienna.

The fundamental shift of OPEC agreeing for the first time in eight years to move away from unfettered production caused the net-long positioning by institutions to rise ~13%. The lion’s share of the move were Oil bears who felt that falling prices were no longer a safe bet, which caused short positions to fall by ~28%.

Q4 Promises To Be Full of Surprises. Access Our Analysts Views On Key Markets Here

Gold prices remain under pressure on the back of the US Dollar’s most impressive run of the year. Borrowing costs are on the rise in anticipation of an 11th-hour rate hike by the Federal Reserve in 2016 to salvage their initial projection of four hikes in 2016 at the December meeting. The 3M ICE LIBOR rate, which is the benchmark for international dollar funding is at its highest level since Q109.

Trader's are still expecting a rally to complement the 25% rally of H116, but it may be some time off given the USD strength.

GOLD TECHNICAL ANALYSIS –The rudder on Gold’s ship, for now, looks to be the 200-DMA at $1,264.77/oz. A hopeful point worth considering is that the slope of the 200-DMA is positive. However, until the price of Gold closes above the 200-DMA, it will remain too early to say whether or not the drop from September 21 in the price of Gold by $100/oz is over.

The last two weeks of price-action consolidation may be a reprieve for Bulls before the next leg lower that could be triggered by another strong advance in the USD. Another short-term indicator to watch, which should discourage short-term bullishness is the 10-DMA, which can keep traders out of trouble by notfighting short-term momentum. The 10-DMA is also at $1257.42/oz. An encouraging sign for Bulls would be to wait for the 10-DMA to cross above the 200-DMA.

Should the price of Gold continue to fall, the next leg lower has a lot of support near the March/May low price zone of $1,215/1200 per oz. zone. As of Monday, the price is sitting near the 38.2% retracement of the December-July range at 1,249. A strong breakdown on the back of risk-on sentiment or a stronger US Dollar like we’ve seen over the last two weeks could quickly take us down to the next zone of support where we see the 50% retracement of the 2016 move higher.

The shorter-term chart below is an H4 chart with Ichimoku Cloud applied and a horizontal line drawn at ~$51/bbl. A break above $51/bbl after bouncing off the cloud would should that we’re entering into a breakout phase that is hard to fight. In the last note, we shared the WTI volatility has fallen to a 15-month low, which tends to favor steady price gains. WTI November options do expire today so there can be a bit of volatility of transition.

One last positive note from the technical perspective is that the 50-DMA is poised to cross above the 100-DMA given the recent rebound. The last MVA crossover occurred in April when Crude rallied ~20% before reaching the June 9 high that we’re currently targeting at $51.64/bbl.