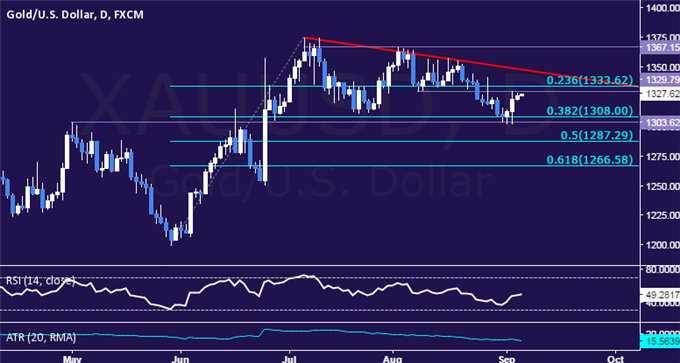 Gold prices edged higher as markets continued to digest the impact of Augusts’ US jobs report on Fed policy speculation. The metal rose amid swelling anti-fiat demand as the US Dollar fell alongside front-end bond yields after a seemingly soft payrolls gain (151k vs. 180k expected) weighed on rate hike bets. The greenback swiftly recovered, with markets rethinking their initial reaction because – despite a miss on the headline figure – the outcome pushed the three-month trend average above the 190k threshold cited by Fed Chair Yellen as supportive for stimulus withdrawal. Gold managed to hold onto most of its gains however.

Looking ahead, Augusts’ ISM Non-Manufacturing Composite survey is in focus. Economists’ expectations suggest the pace of service-sector activity growth slowed for a second consecutive month. US economic news-flow has deteriorated relative to consensus forecasts over the past two months, suggesting analysts’ models are rosier than realized outcomes have confirmed and opening the door for continued disappointment. If this paves the way for a downbeat result, gold prices may continue to push higher.

Crude oil prices spiked to a weekly high after Russia and Saudi Arabia issued a joint statement saying they would coordinate efforts to stabilize energy markets. The WTI contract promptly erased more than half of the move after Saudi Energy Minister Khalid Al-Falih said there is “no need” to freeze output at this time. Al-Falih conceded that restricting output is “among the preferred options” but added that “it is not necessary today”. Russian Energy Minister Alexander Novak expressed similar sentiments last week but President Vladimir Putin voiced his support for a supply-side deal to boost prices over the weekend.

On balance, a functional output freeze agreement emerging out of this month’s informal OPEC meeting in Algiers continues to look unlikely. Such an arrangement would require cooperation between Saudi Arabia and Iran even as the two countries find themselves on opposite sides of at least two on-going military conflicts (in Yemen and Syria). Indeed, several recent efforts to cobble together a joint effort to boost prices have failed to overcome this hurdle. The markets have remained responsive to the stream of conflicting news-flow all the same however. This hints that hopes for a deal will remain a source of knee-jerk volatility in the weeks to come.

CRUDE OIL TECHNICAL ANALYSIS – Crude oil prices rose for a second consecutive day after marking a would-be bottom with the appearance bullish Piercing Line candlestick pattern. Near-term resistance is now at 45.33, the 23.6% Fibonacci expansion, with a daily close above that exposing the 38.2% level at 46.76. Alternatively, a reversal back below the 14.6% Fibat 44.45 opens the door for a retest of the September 1 low at 43.02. 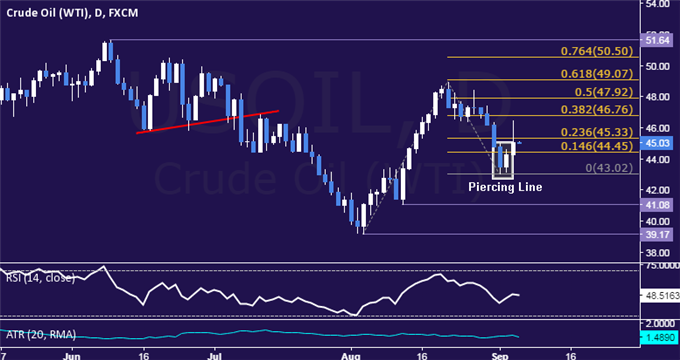