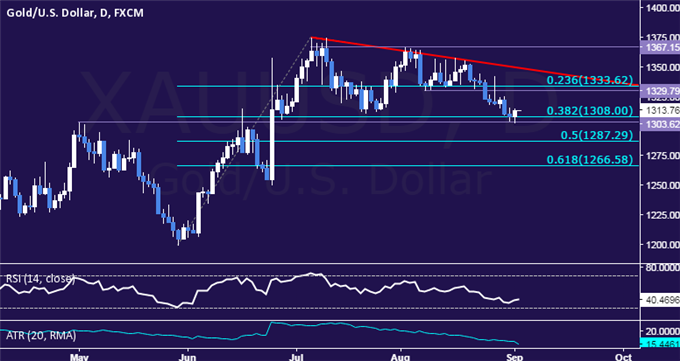 Gold Prices May Resume Two-Week Decline After US Jobs Data

Gold prices edged higher after a disappointing ISM Manufacturing survey weighed against Fed rate hike bets, pushing the US Dollar lower alongside bond yields and boosting the relative appeal of anti-fiat and non-interest-bearing assets. The data showed factory-sector activity unexpectedly contracted for the first time in seven months in August.

Crude oil prices sank after Russian Energy Minister Alexander Novak said there is no need for an output cap at current levels, according to a report from RIA. The remarks are a reversal for Novak, who said last month that his country would be open to talks about a joint output freeze with OPEC and non-OPEC producers.

Looking ahead, all eyes are Augusts’ US Employment report. Consensus forecasts suggest the economy added 180k jobs last month, marking deceleration from the 255k increase in July. The headline unemployment rate is expected to tick down to 4.8 percent. Traders will look to the outcome to confirm or contradict an up-shift in the projected Fed rate hike timeline following hawkish comments from Chair Yellen and Vice Chair Fischer at last week’s Jackson Hole Symposium.

A meaningful upside surprise akin to those in June and July is likely to boost bets on the imminent resumption of stimulus withdrawal, sending front-end borrowing costs and the greenback higher in tandem. Needless to say, such a scenario bodes ill for gold prices. Crude oil may weaken as the USD-denominated WTI contract buckles to de-facto selling pressure. A soft payrolls print will probably deliver the opposite results.

Are retail traders buying or selling gold ahead of the US jobs report? Find out here!

CRUDE OIL TECHNICAL ANALYSIS – Crude oil prices fell for a fifth consecutive day, making for the longest losing streak in a month, having topped near the $49/bbl figure (as expected). Near-term support is now at 42.91, the 61.8% Fibonacci retracement, with a break below that on a daily closing basis opening the door for a test of the 76.4% level at 41.48. Alternatively, a rebound above the 50% Fib at 44.07 targets the 38.2% retracement at 45.22. 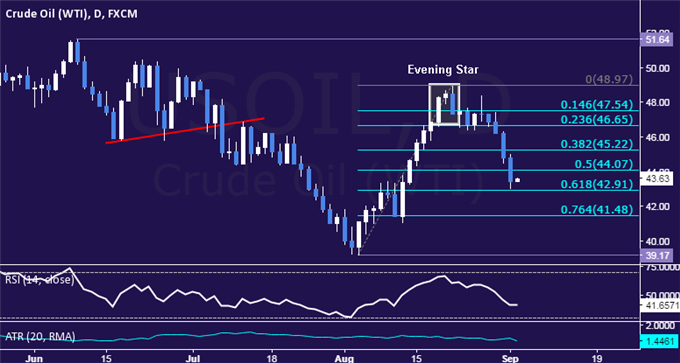