- New home loans fell in February while the gap between PPI and CPI widened.

The offshore Yuan rebounded against the U.S. Dollar in the early afternoon of Asian session on March 9th. This is likely in related to Yuan’s increased borrowing costs in the offshore market: HIBOR, from overnight to 1-year term, all rose on the day. Normally, when Yuan’s liquidity in the offshore market tightens, Yuan’s funding costs will increase.

In specific, the overnight HIBOR jumped to 3.4715% from 1.7135% a day ago; this is also significantly higher than the average rate of 2.1319% over the past twelve months. Traders will keep an eye on Yuan’s borrowing rates. If they continue to rise, the offshore Yuan may advance further against the Dollar. 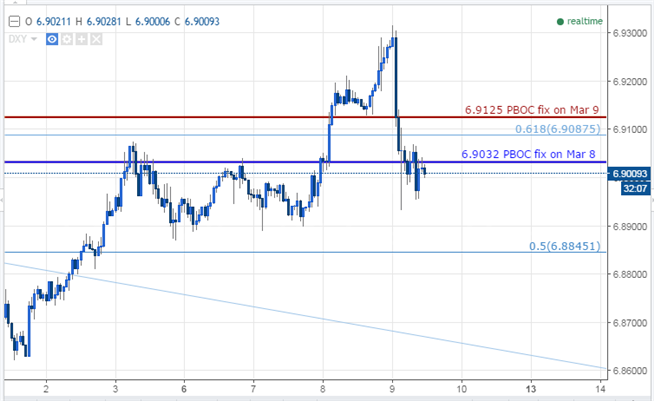 China’s New Yuan Loans in February came in great-than-expected at 1.170 trillion Yuan and increased +37% from a year ago. While compared to the 2.020 trillion Yuan new loans in January, the credit insurance in February has slowed down. More importantly, loans made to the property sector, a measure that may impact China’s monetary policy, dropped to 300 billion Yuan from 752 billion Yuan in the month prior. Also, the proportion of property loans in total loans fell to 25.7% from 37.0% over the same span of time. 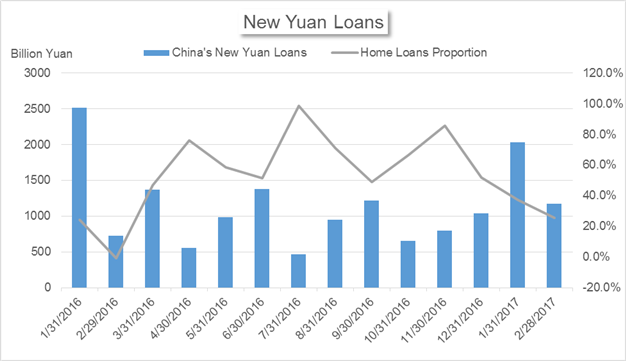 Remarks from the Minister of Housing and Urban-Rural Development yesterday indicate that the risk of property price bubbles is still a major concern to regulators and thus, they will keep a close eye on the market.

- China’s Consumer Price Index (CPI) rose 0.8% in February on an annualized basis, following a 2.5% increase in January; this is the slowest growth in two years. Producer Price Index (PPI), on the other hand, expanded 7.8% in February, the largest expansion since September 2008. The gap between the two price indexes continued to widen. 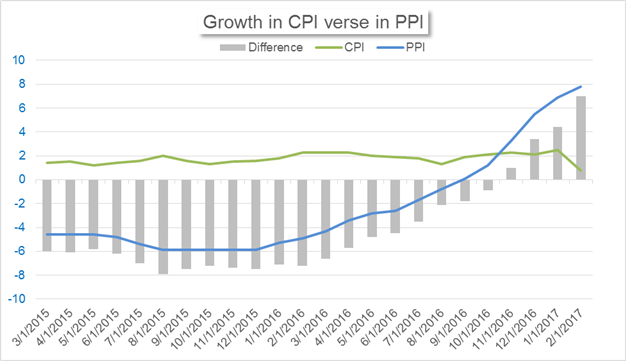 Increases in six energy and raw material prices have contributed to 80.8% of the growth in PPI, according to the statistics bureau’s report. Yesterday, officials from the National Development and Reform Commission addressed the same issue. The soaring prices likely increase costs and then hurt profits of manufacturing companies which have already face increasing challenges amid a declining global demand.

In terms of the CPI, drops in vegetable prices have largely contributed to the weak growth in February. After deducting this component, the consumer prices expanded at 1.8% in the month, indicating the risk of deflation remains low for China. As a result, the February CPI print will not have much impact to China’s monetary policy. From regulators’ point of view, controlling energy and housing prices will be more important targets.