The Canadian Dollar was the worst-performing major currency on Wednesday, struck down by relatively dovish commentary from the Bank of Canada (BoC). AUD/CAD, NZD/CAD, EUR/CAD, and USD/CAD rose. Conversely, the British Pound outperformed against its major peers as better-than-expected local data poured cold water on easing expectations from the Bank of England (BoE). GBP/CAD rose 1.2 percent.

Stephen Poloz, Governor of the BoC, spoke after today’s expected rate hold (at 1.75%) and said that the door is open to a cut “if needed”. He added that the central bank’s view was that easing today was not warranted “at this time”. The tone was a noticeable shift from earlier commentary. Odds of a 25-bp rate cut at the June monetary policy announcement are now at 68.2% according to overnight index swaps.

Across the Atlantic Ocean, the Confederation of British Industry (CBI) reported business optimism at its highest since April 2014 in January. The British Pound soared alongside local front-end government bond yields, pushing GBP/USD to break above a Symmetrical Triangle as expected. Odds of a 25-bp rate cut from the BoE at the end of this month have cooled slightly, but they remain close to evenly split.

Sentiment deteriorated by the end of Wednesday’s Wall Street trading session as the S&P 500 and Dow Jones gave up their upside gaps and finished little changed. Fears about the coronavirus breakout in central China remain, and the deterioration in market mood has impacted risk-sensitive crude oil prices. WTI closed at the lowest since the beginning of December.

S&P 500 futures are pointing little lower heading into Thursday’s Asia Pacific trading session. A “risk off” tone could spell trouble for the sentiment-linked Australian Dollar. Its focus though will likely be on the upcoming local jobs report. RBA rate cut bets are about 60% (25-bp) for February according to cash rate futures. This means that Australia’s jobs report could spell volatility for AUD/USD.

Join me on Thursday at 00:15 GMT as I cover the Australian jobs report LIVE and its impact on the AUD/USD outlook!

USD/CAD accelerated its near-term ascent after bottoming earlier this month , as anticipated via trader positioning signals. Prices paused gains on key resistance at the upper edge of the psychological barrier between 1.3111 – 1.3134. Form here, confirming a breakout to the upside opens the door to testing 1.3208 before aiming for the December peak just under 1.3328. 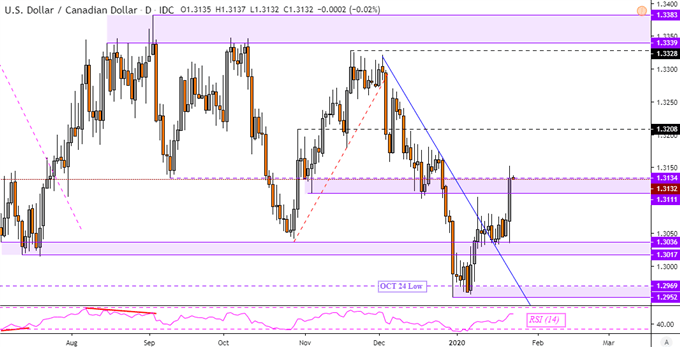