The anti-risk Japanese Yen appreciated across the board on Friday as stocks declined in Asia, Europe and in the US. This followed Thursday’s Fed rate decision where the central bank stoked December rate hike bets, boosting the US Dollar. The S&P 500 dropped an early warning sign that Friday’s session was about to take a turn for the worst.

Indeed that was the case, the S&P 500 ended the day about 0.92 percent lower. The NASDAQ Composite fared worse, tumbling about 1.65%, weighed down by tech shares. US government bond prices rose as yields fell, signaling a flight to safety reminiscent of what we saw back in October. Back then, Wall Street wiped out all the progress it made in 2018 up to that point.

Meanwhile the British Pound was weighed down by unnerving news in regards to Brexit ordeals. Jo Johnson, UK’s Minister for Transport, resigned as he stated that the country is “barreling towards an incoherent Brexit.” This resulted in EUR/GBP’s best performance in a single day since September 21st as was anticipated. However, more gains are needed to overturn the dominant downtrend.

As we begin this week’s trading session, crude oil prices are flirting with an eleventh consecutive day of losses. That would be its longest losing streak since at least 1984. Last week, OPEC said that members will be discussing output cuts for 2019 which may slow the weakness seen in crude oil lately. In regards to this, keep an eye on how OPEC+ nations discussed this over the weekend at a meeting in Abu Dhabi. While there may be a correction due in the near-term, there are more downside risks ahead.

Monday’s Asia Pacific trading session is notably lacking critical economic event risk. As such, we may be in for a rather quiet trading session. With that said, the Nikkei 225 and other regional indexes may echo the weakness seen on Wall Street Friday. This may lead the anti-risk Japanese Yen higher.

Following the formation of a Bearish Harami Cross candlestick pattern, the S&P 500 fell by the most in a single day in exactly one week. The pattern does indicate indecision and more closes under it can confirm a pronounced decline to come. As such, near-term support is eyed between 2,676 and 2,801 before exposing the October 29th low at 2,603. 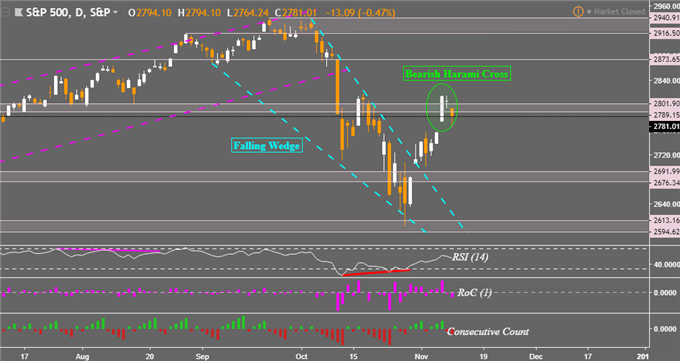 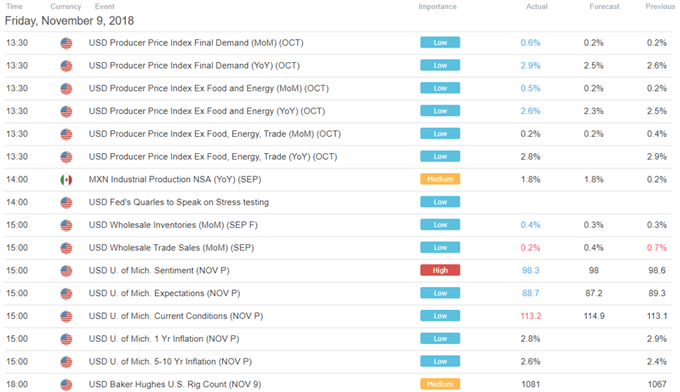