When we last looked at AUD/USD, the pair struggled to push above a descending trend line from February. This is a resistance line that has been keeping the dominant downtrend in the Aussie Dollar intact. It was looking as though we could get a reversal of the prolonged descent in the pair, but the last few trading days of this past week proved otherwise. Meanwhile, EUR/AUD accelerated its drop as anticipated.

Looking at the AUD/USD daily chart below, the climb above the February trend line appears to have been a false breakout for now. Prices were unable to follow through as upside momentum ran out. This does leave the Australian Dollar sitting squarely on support which is the February line and also the 14.6% Fibonacci extension level at 0.72283. 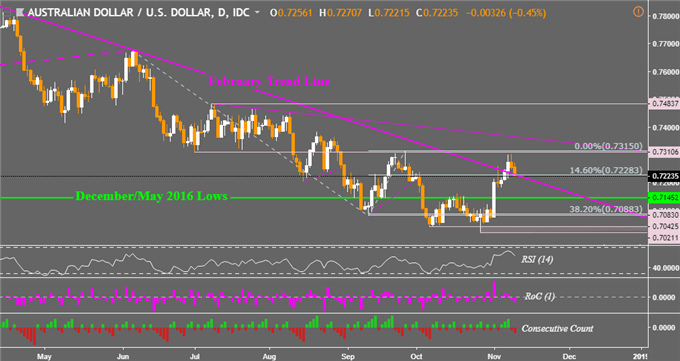 The lack of confirmation in Aussie’s breakout attempt prevents a bullish technical forecast, but it also won’t be bearish. Zooming in on the 4-hour chart, I have my eyes on a potential near-term rising trend line from late October. At the moment, it only contains two points where prices have tested the line. A third test would confirm the trend line if it holds.

A descent through it would be bearish through. This would expose the December/May 2016 lows around 0.71452. Meanwhile, immediate resistance appears to be 0.73106 which is just shy of the highs reached this past week. An ascent above it would confirm a reversal of the dominant downtrend. But for now, the AUD/USD technical forecast will have to be neutral. 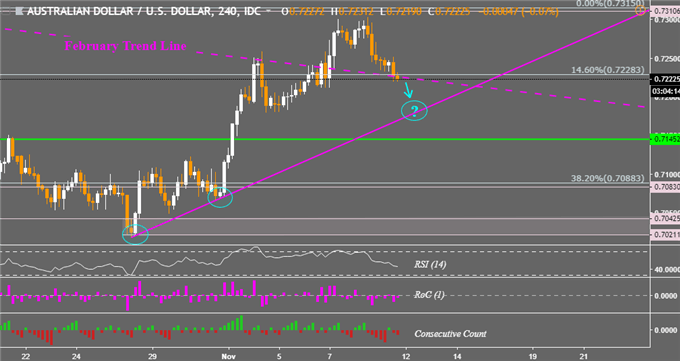 Arguably, AUD/JPY made more interesting progress this past week than AUD/USD. AUD/JPY prices not only closed above the descending February trend line (which is also present here) but achieved confirmation as well. But during the last trading day of this past week, a bearish engulfing candlestick formed on the daily chart. This does show indecision and another close lower would confirm it, signaling a reversal to come. 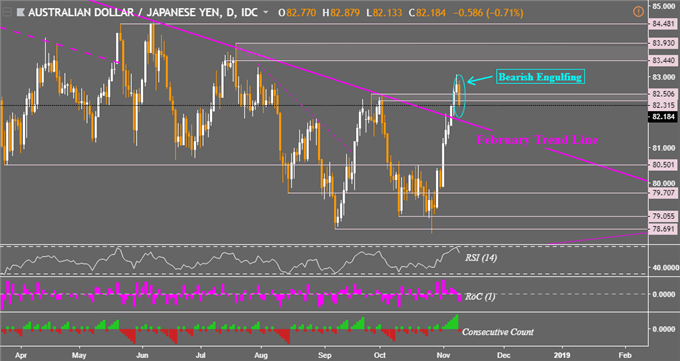 Such an outcome would place the February trend line as potential former resistance now support next. Furthermore, zooming in on the AUD/JPY 4-hour chart shows that a near-term rising support line from late October was broken. This adds another point to the argument that AUD/JPY may see its next leg as a decline. But the push above the February trend line should not be overlooked if this isn’t a false breakout.

Taking this into consideration, the AUD/JPY technical forecast will be left at slightly bearish. Another close under the bearish engulfing would increase the odds of a more pronounced descent to come. But the February trend line may hold, keeping prices from falling further. A fall under it though opens the door to testing the next area of support at 80.50 which is the March lows. Resumption of the near-term uptrend has 83.44 – 83.93 eyed as resistance. 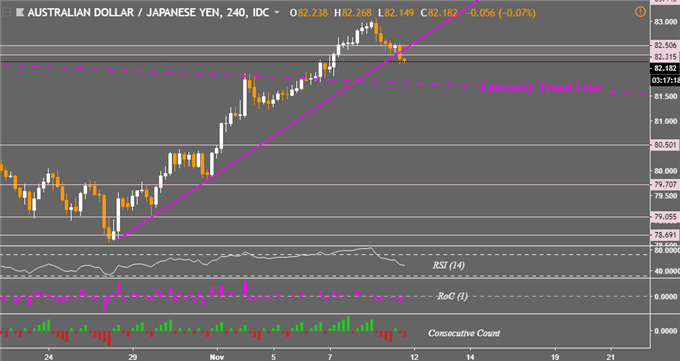