USD/CAD Forecast: Will the Bank of Canada (BOC) Capitulate?

The Bank of Canada (BOC) remains one of the last standing central banks to avoid cutting interest rates this year. Despite persistent slowing global GDP growth headwinds, the Canadian economy has remained resilient and largely supported the BOC’s firm monetary policy stance. In turn, the Canadian Dollar (CAD) has strengthened considerably throughout the year and is the top performing G10 currency against the US Dollar with a year-to-date spot return of roughly 3.5%. That could soon change, however, if the BOC comes under pressure to capitulate and join the dovish central banks.

This bearish CAD scenario turned increasingly likely following the October BOC Meeting where the Bank of Canada softened up some language in its monetary policy statement and also provided uninspiring revisions to its economic projections. Notably, the BOC lowered its 2020 inflation forecast to 1.8% and could provide capacity for dovish action down the road – particularly if Canadian inflation does in fact sink below the central bank’s 2% symmetric target.

I noted mid-October that outlook for the Canadian Dollar was at risk ahead of the Canada jobs report and October BOC meeting. With Canada inflation (measured via CPI Trim – the BOC’s preferred inflation gauge) tracking close to the central bank’s 2% symmetric target, however, it may be difficult for the BOC Governing Council to justify cutting its policy interest rate. Though a disappointing Canada GDP reading, which just crossed the wires last week at a worse-than-expected 1.3% annualized rate when compared to the market consensus of 1.4%, is more than likely on the BOC’s radar.

Also, Bank of Canada Deputy Governor Lawrence Schembri recentlydiscussed how “this link between inflation and economic growth is at the core of the Bank of Canada’s approach to conducting monetary policy.” Correspondingly, upcoming key economic activity indicator releases that weigh on major GDP components like consumption and housing could carry greater weight going forward with regards to their impact on future BOC monetary policy decisions and thus the Canadian Dollar. 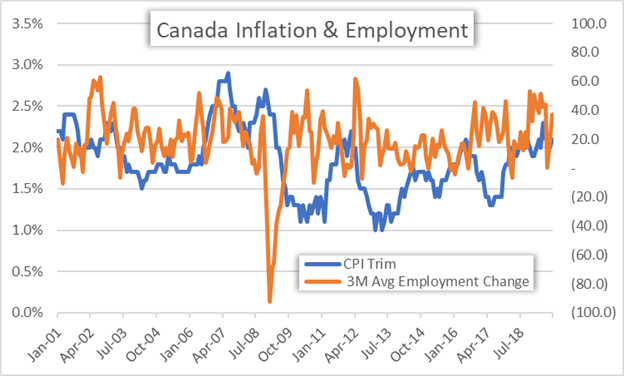 Moreover, BOC Governor Poloz concluded his opening press statement how the “Governing Council is mindful that the resilience of Canada’s economy will be increasingly tested as trade conflicts and uncertainty persist” following the BOC rate decision announced last week. Nevertheless, in light of recent US-China trade relations improving (at least according to the Trump administration) and US congress reportedly inching closer toward approving the USMCA trade deal, the Bank of Canada could continue to underscore its firm monetary policy stance.

Yet market expectations for the BOC to remain on hold (i.e. leave its policy interest rate unchanged) is largely baked into prices already. Correspondingly, there remains a downside risk that a destabilizing event to the global economy and shock to sentiment – such as a major breakdown in the phase 1 agreement talks and signing by President Trump and Xi seemingly unfolding already – might force the BOC to soon capitulate and finally cut rates. 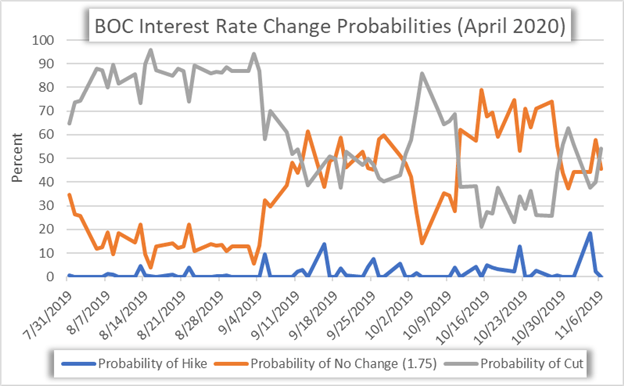 According to the latest overnight swaps data, there’s an 81.1% probability that the BOC will leave its policy interest rate unchanged at its next meeting scheduled for December 04. Looking further out to the April 2020 BOC meeting we find that the probability of the central bank lowering its policy interest rate is being priced back in and now outpaces the likelihood that the Bank of Canada remains on hold until then. Looking forward, BOC Governor Poloz stated that the central bank “will play close attention to the sources of resilience in the Canadian economy – notably consumer spending and housing activity.”

Moreover, Poloz mentioned that “the economy continues to create new jobs at a solid pace, the unemployment rate is near an all-time low” immediately following a comment on the resilience of the Canadian economy. Alas, due to the inherent relationship between inflation, employment and economic activity, upcoming Canadian labor market, consumption and housing figures could have a greater impact on CAD price action as forex traders react to changes in BOC rate cut odds. 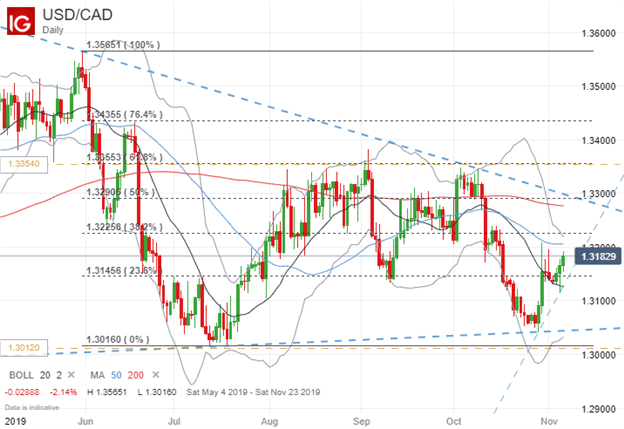 Spot USD/CAD price action has rebounded back above a confluent resistance zone near the 1.3150 level underpinned by its 20-day simple moving average and 23.6% Fibonacci retracement of its trading range so far this year. While this area will now look to provide support to greenback relative to its Canadian Dollar counterpart, spot USD/CAD could find technical resistance from its 50-day SMA and 38.2% Fib. Judging by the currency pair’s 1-month (tenor that encompasses the next BOC meeting) implied volatility reading of 4.51% derived from forex options contracts, USD/CAD is expected to range between 1.3012-1.3354 with a 68% statistical probability. 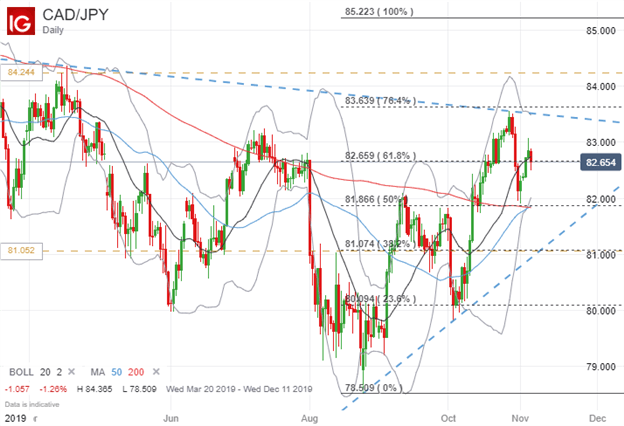 The Canadian Dollar has climbed considerably against its JPY counterpart over the last two months driven broadly by improving market sentiment and appetite for risk. Though CAD/JPY could come under renewed selling pressure if the global growth or US-China trade war narratives take a turn for the worse. Potential downside in the Canadian Dollar could be exacerbated relative to JPY considering the Yen is typically used (borrowed) to fund the popular forex carry trade and thus makes it particularly sensitive to changes in market sentiment and interest rate expectations.

CAD/JPY could find support from the 61.8% Fibonacci retracement of its March 01 swing high to August 25 swing low as well as its 20-day SMA, but bears could eye the 82.000 and 81.000 handles as a possible downside targets if spot prices fail to stay afloat at this level. Judging by CAD/JPY 1-month options implied volatility of 6.74%, spot prices are expected to fluctuate between 81.052-84.244 with a 68% statistical probability. 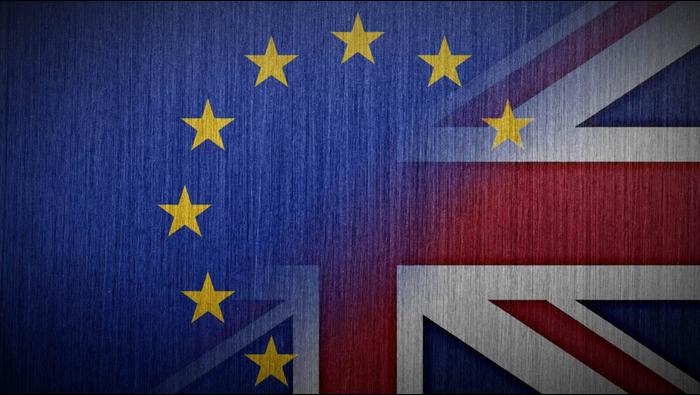 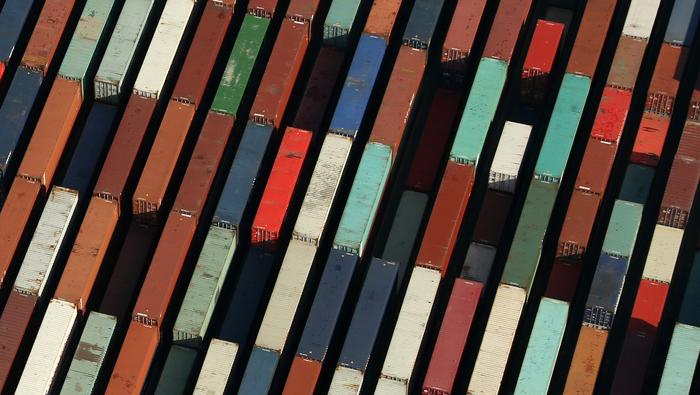