Bank of Canada Deputy Governor Lawrence Schembri noted a day after the September BOC meeting “growth that’s slower can pull inflation below our 2% target,” and added how “this link between inflation and economic growth is at the core of the Bank of Canada’s approach to conducting monetary policy.” Also, the central bank still expects the Canadian economy to slow in the second half of the year considering the US-China trade war, which has already taken its toll on global GDP growth, still lingers as the principal risk to outlook. 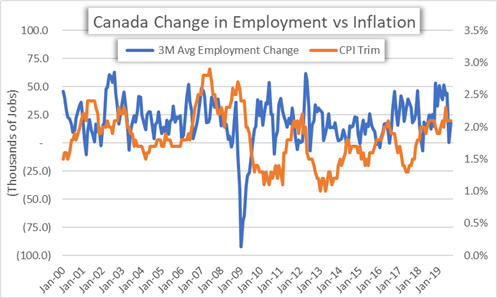 Additionally, Schembri mentioned that “a strong job market and rising wages were supporting growth in Canadian household consumption,” but continued how the BOC’s core inflation measures are tracking near its 2% target, which is “consistent with the idea that the economy’s output gap is essentially closed.” Correspondingly, as illustrated in the chart above, the 3-month average change in employment has potential to serve as a precursor to where CPI Trim – the Bank of Canada’s preferred measure of inflation – heads next.

That said, traders will be provided with a fresh look at Canada’s labor market Friday at 12:30 GMT with the release of Canadian employment data for September. Markets are expecting Canada’s net change in employment to cross the wires at 7.9K judging by median economist estimates, which is listed on the DailyFX Economic Calendar along with prior readings for comparison.

Alas, an exceptionally poor Canadian jobs report would provide the BOC with material evidence that economic activity is slowing, which increases the potential that slack in Canada’s labor market will spillover to weigh negatively on consumer spending and inflation. In turn, a weak reading on Canada net change in employment or unemployment rate for September could tip the scales that leads to a dovish shift in BOC monetary policy.

Seeing that the Bank of Canada remains one of the last standing hawkish central banks, a pivot by the BOC and Governor Poloz towards a more accommodative stance remains a major downside risk to the Canadian Dollar that may soon materialize – particularly if Friday’s employment change data disappoints. Consequently, Canadian Dollar risk reversals point to the overarching bearish bias among forex options traders ahead of the upcoming Canadian jobs report.

A risk reversal reading above zero indicates that the demand for call option volatility (upside protection) exceeds that of put option volatility (downside protection). The IG Client Sentiment Report, which details client positioning across a variety of currencies and assets, is updated in real-time and also provides insight on the bullish or bearish biases of traders. 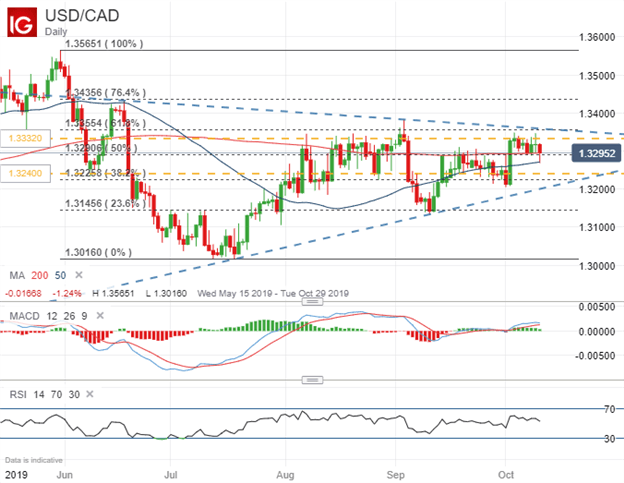 Shifting gears to the Canadian Dollar’s technical backdrop, spot USDCAD its currently testing confluent support around the 1.3300 price level, which is underscored by the currency pair’s 50-day simple moving average and mid-point retracement of its trading range since the end of May. If this area of support fails to keep spot USDCAD price action afloat going forward, the 200-DMA will likely be targeted next before the lower bound of the 1-standard deviation options implied trading range and 38.2% Fibonacci retracement level come into focus. 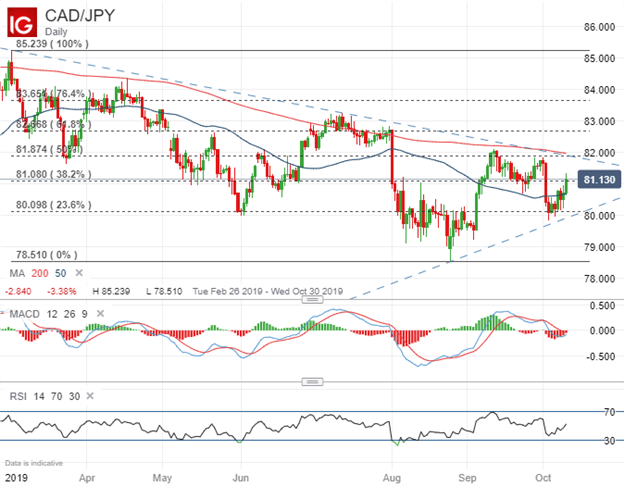 Turning attention to CADJPY, spot prices remain comfortably wedged between the 80.000-82.000 handles, which will look to serve as respective levels of technical support and resistance. The 38.2% Fibonacci retracement of spot CADJPY’s year-to-date trading range (excluding the JPY flash crash low at the beginning of January) could serve as a more immediate obstacle for bulls whereas bears will need to overcome CADJPY’s 50-DMA. A topside breakout from the triangle chart pattern etched out over the last several months could indicate a major reversal in trend while a breakout to the downside likely opens up the door to retest August’s swing low.