The British Pound continues to be held hostage by uncertainty over the future of the EU-UK relationship as the October 15 deadline – created by Prime Minister Boris Johnson – nears. He said that a trade agreement by that point needs to be reached in order to provide ample time for policymakers to debate and pass it before the end the of transition period on December 31.

In the latest round of what has come to be a multi-year ride on a Ferris wheel of debates, debacles and elections, Mr. Johnson’s government has recently put forward the Internal Market Bill. The controversial aspect of it – which I wrote more about in my prior piece – has to do with overriding “key provisions set in place by the original EU-UK Withdrawal Agreement”.

Other key issues like fisheries continue to be a major point of contention and that are contributing to delayed Brexit breakthroughs. For Brexiteers, they view key fishing grounds as a reclamation of British national sovereignty – a notion that falls in line with the ideological undercurrent of Brexit. Until the transition period expires, the UK still must adhere to the EU’s Common Fisheries Policy (CFP).

Without diving – as it were – too much into the details, from a market-oriented perspective, the conflict between EU and UK policymakers is adding another layer of uncertainty to a fundamentally-precarious situation. For the British Pound, this may cause swelling pressure to swell if its infected by fears of a disorderly Brexit whose effect would likely be compounded in the virus-ridden environment.

EUR/GBP price action has been relatively difficult to discern when attempting to extract a consistent pattern, but its recent moves indicate that the start of a pullback may be approaching. After topping at a multi-month high in September – marked by the peak at 0.9258 – EUR/GBP quickly retreated and is trading close to a familiar inflection point at 0.9079. 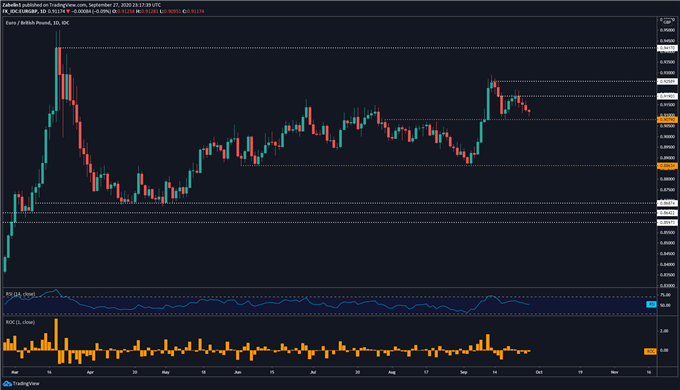 Breaking below that floor with follow-through may inspire traders to capitalize on what could be the start of a notable pullback. Selling pressure in that scenario could start to abate at or close to support at 0.8863 where buyers may swoop in to position themselves at what could be a reversal point. For more technical updates, be sure to follow me on Twitter @ZabelinDimitri.

US Dollar Braces for Geopolitically-Packed Week

The US Dollar may rise if a host of domestic political uncertainty puts a premium on liquidity over returns and pushes the haven-linked Greenback higher at the expense of equity markets and risk-oriented FX. The latter group include the Australian and New Zealand Dollars, emerging market currencies and other assets with comparatively higher betas.

As mentioned in my previous article, concern about how the nomination of the Supreme Court nominee, Coney Barret, will impact bipartisan fiscal stimulus talks continue to be a major point of uncertainty. As data starts to underperform as a combination of what I call economic recalibration and fading fiscal stimulus benefits, the urgency to quickly introduce another round is swelling.

Fading notions of a compromise between Democrats and Republicans – with the fissure growing as a result of the Supreme Court nomination – appears to be weighing heavily on market mood. This pessimistic view is compounded by the new spike of Covid-19 infections that has resurrected fears about prolonged or extended lockdown measures that would likely hinder an already-precarious economic recovery.

Chairman Jerome Powell has emphasized that monetary policy can only do so much, and that really it boils down to a problem of demand. With rates between 0.25%-0.00%, the burden of reviving economic activity falls on Congress amid a polarizing election. It is difficult to see how another fiscal stimulus round will pass before November 3, and this gloomy reality appears to be sinking into markets and pushing the USD higher.