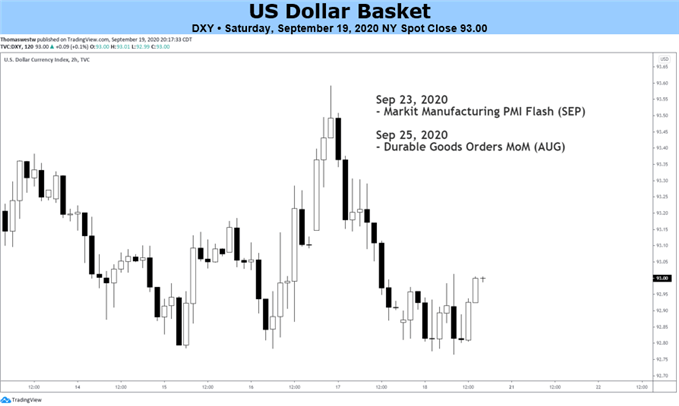 US Dollar Outlook Ahead of Mnuchin, Powell Testimonies

On Wednesday, Fed Chairman Jerome Powell will be testifying to the House of Representatives’ Select Subcommittee on the Coronavirus Crisis. At previous interviews, he has stressed the need for continued monetary support with a growing emphasis on the fiscal side. Mr. Powell has said that monetary policy can only do so much and diplomatically stressed the need for the federal government to step in.

Republicans and Democrats have been locked in a stalemate over the proposal for another fiscal stimulus package with the former wanting a trimmed down version after the latter’s $3 trillion aid bill passed in May. Rather unexpectedly, the market reaction to the lack of progress has been somewhat muted, perhaps indicating that a degree of bipartisan intransigence was already embedded in market expectations.

The following day, Mr. Powell and Treasury Secretary Steven Mnuchin will both be testifying to the Senate Banking Committee on coronavirus relief. Depending on the nature of the commentary at this hearing and the one with only the Fed Chair, the outlook from fiscal and monetary authorities could tilt the scales of market mood to favoring either a risk-on or risk-off bias.

Given the recent improvement in data and general signs of economic stabilization, a relatively upbeat tone may punish the haven-linked US Dollar, which at the time of writing is offering a negative real interest rate. The anti-risk Japanese Yen may suffer with the Greenback while cycle-sensitive FX like the Australian and New Zealand Dollars may blossom with other high-beta assets like emerging market currencies and equities.

Economic Data Outperformed Expectations on a Global Level – Are We Returning to Normal?

On a global scale, data has been tending to outperform since the trough in March, and in fact reached its highest recording ever over the past few weeks. The unprecedented surge was likely the result of economists and analysts overestimating the severity of the virus-induced recession. The recent plateauing and modest decline we are seeing is likely the result of market-wide recalibration of economic forecasts and expectations.

In this regard, we could see equities pullback again – as they did over the past two weeks – and help push the US Dollar higher. However, this scenario may be more so the result of a short-term retreat and brief shift into a risk-off dynamic rather than the definitive start of a complete trend reversal. For that reason, the US Dollar generally in the week ahead may weaken.

US Dollar May Pullback on PMI Data

This effect may be compounded by preliminary US manufacturing, services and composite PMI data for September. Analysts are expecting prints above the 50.00 mark which draws the line between contraction (below 50) and expansion (above 50). While the data is expected to be weaker than the prior prints – falling in line with the notion of slowing economic acceleration – the risk-on tilt that may ensue may punish USD.