The US Dollar made upside progress last week against most of its ASEAN counterparts such as the Singapore Dollar, Malaysian Ringgit and Philippine Peso. From a technical standpoint, there could be room for further near term gains. A notable exception was the Indonesian Rupiah, which managed to find some traction against the Greenback.

The focus for USD against some of its Southeast Asia peers remained on broader market sentiment instead of regional factors – as anticipated. In that regard, the MSCI Emerging Markets Index (EEM) fell alongside the S&P 500. One factor behind the souring in market mood seemed to have been Fed Chair Jerome Powell undermining negative rate bets as central bankers also casted doubt over the uncertainty to growth.

Meanwhile the Bank of Indonesia expressed its view on the exchange rate, mentioning that it sees the Rupiah as undervalued. The central bank reiterated its intent to intervene in its currency. Yet at the same time, investors may view more aggressive efforts with greater scrutiny should capital outflow risks increase. For now, it seem IDR was able to find support in the Bank of Indonesia’s effort. 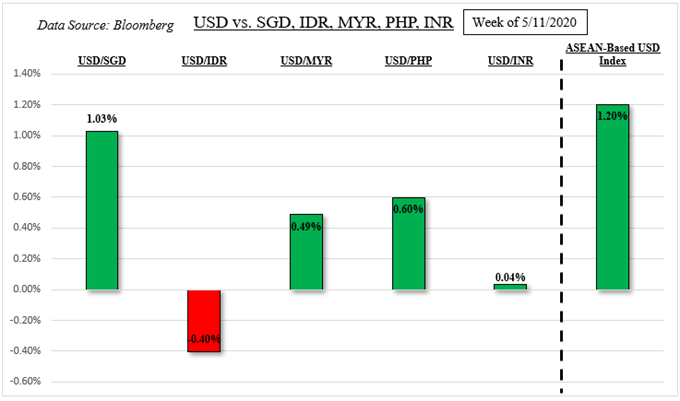 In the week ahead, more updates are due from the central bank of the world’s largest economy. The FOMC meeting minutes on Wednesday could expand upon some of the uncertainties that policymakers are anticipating in the medium term. Chair Jerome Powell will also be speaking and he may reiterate recent cautious commentary as nations look to gradually ease lockdown measures.

Meanwhile in the background, US-China tensions seem to be heating up. Last week President Donald Trump showed hesitation to speak to his Chinese counterpart, Xi Jinping. He threw around ideas of cutting ties with China as the latter urged the US to push back on its ‘cold-war mentality’. This comes as the White House looks into how China handled the outbreak of Covid-19. If trade war fears are reignited, that could sour sentiment.

Jobless claims from the US are expected to rise about 2.5 million, and while that may be priced in, it may increasingly dent overall consumption. This is the largest segment of GDP and retail sales plunged in April by a record amount, while also missing expectations. Helping to support sentiment was the Fed initiating purchasing corporate debt, resulting in the fastest increase in its balance sheet in over 3 weeks.

Further certainty about additional local fiscal measures may also provide relief for nervous investors. While Republicans have voiced doubt over the viability of the Democrat-proposed US$3 trillion package, House Speak Nancy Pelosi said she is open for negotiations. On balance, this could be pointing to what may be a mixed week for the US Dollar as it inversely follows the EEM in relation to ASEAN currencies.

Focusing on ASEAN-specific event risk, the Bank of Indonesia monetary policy announcement is due on Tuesday. The central bank is expected to reduce the 7-day reverse repo rate by 25-basis points to 4.25% from 4.50%. Should the Bank of Indonesia continue stressing the need for FX intervention, the Rupiah could hold its ground. There may also be a chance that Singapore releases the finalized reading on first-quarter GDP. The window is 5/19 – 5/26. But, USD/SGD could focus on broader market sentiment down the road.

What are some unique aspects of trading forex? 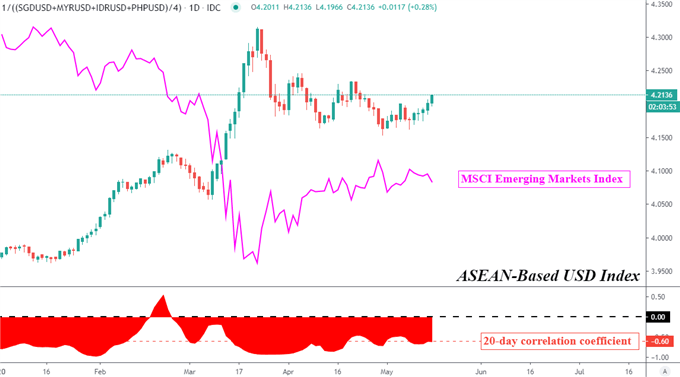