As the haven-linked US Dollar aggressively appreciated amid the coronavirus outbreak, ASEAN central banks stepped up FX intervention efforts to help stem selling pressure in their currencies. A great way to measure the vigor of their actions is by looking at foreign exchange reserves. Lately pairs such as USD/SGD, USD/IDR and USD/MYR have given back recent gains, perhaps suggesting that these efforts are working.

On the chart below, foreign exchange reserves have been declining in ASEAN nations such as Singapore, Malaysia and Indonesia. In fact those in Malaysia dipped to US$101.7 billion in March which was the lowest since the beginning of 2019. Indonesian FX reserves fell to US$120.97 billion last month which was the smallest since May 2019. Singapore levels have also turned cautiously lower.

China – the world’s largest holder of foreign exchange reserves - has also been spending its fair share. Their holdings declined by $46.1 billion last month which was the most aggressive pace since the end of 2016. When central banks spend their international reserves – which are mostly held in US Dollars - they can use them to purchase domestic FX and boost prices. This can go on so long as their holdings are not fully depleted.

Granted, there has been a material shift in market sentiment since the end of last month. A combination of aggressive fiscal and monetary easing efforts from nations across the world to help stabilize economic health appears to be working thus far. But investors can become nervous in the event that risk aversion resurfaces and look at levels of FX reserve depletion with greater scrutiny. 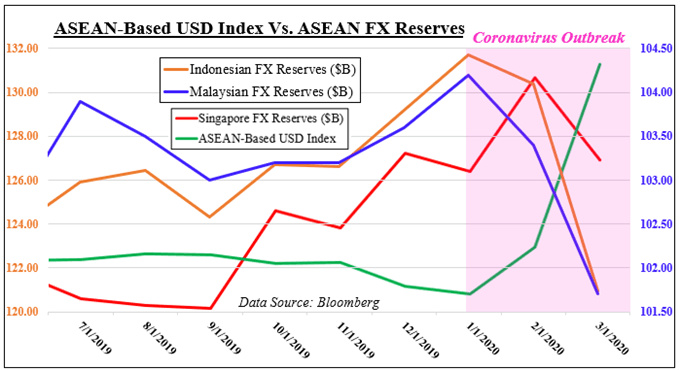 These vulnerabilities can come back into play if capital begins flowing out of emerging markets again. Cumulative capital outflows from developing countries have surpassed levels from the 2008 financial crisis by more than twice. As investors shift their attention from generating a profit and into preserving capital, they often flock to the safety of US government bonds.

That tends to bode well for the US Dollar. On the next chart below my ASEAN-based US Dollar index can be seen inversely following a proxy of emerging market capital flows. As the latter stabilized, the Greenback began giving up some of its upside progress. What also helped ease aggressive selling pressure in ASEAN FX was the Federal Reserve launching the Foreign and International Monetary Authorities Repurchase Program.

Also known as FIMA, it is a program that enables central banks to temporarily convert their Treasury holdings into cash. This can help alleviate what has been a shortage of US Dollars. As economies continue grappling with the virus and focus on social distancing measures, the outlook for ASEAN FX will likely remain glued to market sentiment. The longer countries stay closed, the more pressure theses currencies risk facing.

Capital Flow Impact on the US Dollar 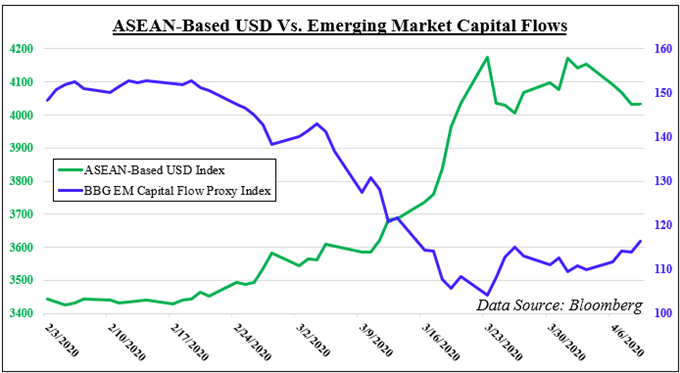