The US Dollar extended its rally against most of its ASEAN counterparts this past week – as expected. This is despite the Federal Reserve sending rates to zero, launching quantitative easing and reintroducing 2008-crisis era liquidity tools. All of this was to help support the world’s largest economy that is at risk amid the coronavirus pandemic.

The Malaysian Ringgit weakened the most over the course of 5 days since 2016. The Singapore Dollar is on pace for its worst month since 2012. The Indonesian Rupiah experienced its most dismal week since 2001, falling as much as 11.47% against the US Dollar. Meanwhile the Philippine Peso managed to hold its ground, netting little changed against the Greenback despite a rate cut from the Philippine Central Bank. 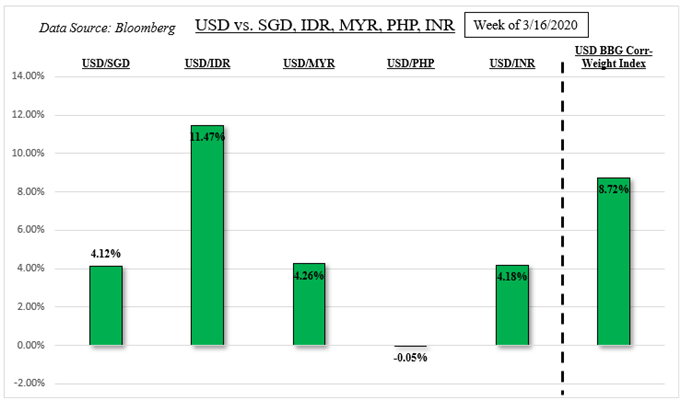 The rout on global equities continued, extending into ASEAN stocks as well. Indexes and ETFs tracking Singapore, Indonesia, Malaysia and the Philippines can be seen heading for their worst month since 2008 or beyond – see chart below. This is as Wall Street clocked in its most-aggressive weekly decline since the financial crisis over a decade ago. 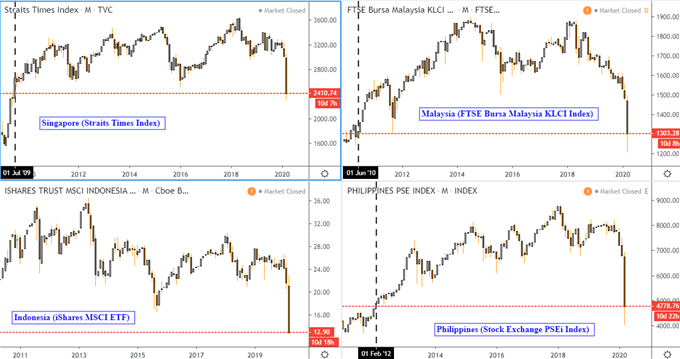 A critical contributor to how the US Dollar has been behaving is the direction of capital flows. Those are draining out of emerging market economies. According to the Institute of International Finance, “cumulative capital outflows since the COVID-19 episode began in late January are already twice as large as in the global financial crisis and dwarf stress events such as the China devaluation scare of 2015”.

During times of extreme uncertainty, investors divest from riskier assets and move capital to relatively safer places. On this front, United States Treasuries – and by extension the US Dollar - are the usual favorite for their “anti-risk” status. As the world’s reserve currency, the Greenback is also highly liquid. It is thus no surprise that it has managed to pull off impressive gains across the board.

The flow of capital may also help explain why the Philippine Peso managed to avoid aggressive losses for the time being. The Philippine Central Bank released a report last week showing foreign portfolio investments rising 11.27% from January to February. Amid the virus outbreak, the country also had relatively lower tourism exposure to China as the latter implemented aggressive social isolation measures. 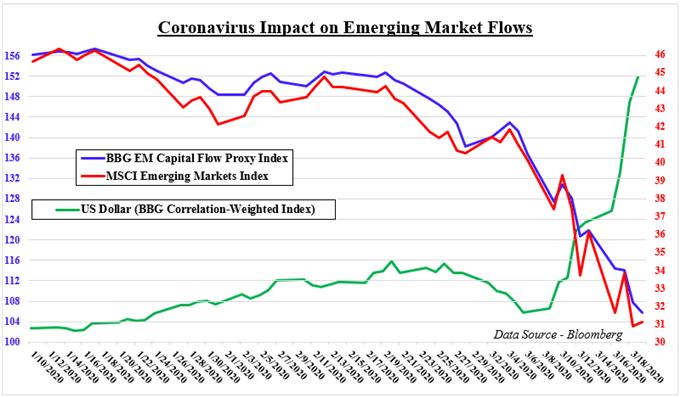 Next week, the world will get a better idea of how the coronavirus is impacting the major economies. Gauges of business activity from Europe and the United States will cross the wires. These are anticipated to shrink by the most since 2008 or even beyond. Worse-than-expected outcomes will likely raise fears of a global recession which may amplify emerging market capital outflows.

In particular, the US will release data on unemployment benefit claims that were applied for this past week. Those are anticipated to skyrocket by 1.5 million, which would be significantly higher than the previous +281k outcome. That would be a new record, surpassing individual instances during the 2008 financial crisis. That may induce further risk aversion, boosting the US Dollar.

The focus for ASEAN pairs such as USD/SGD, USD/IDR, USD/MYR and USD/PHP will likely remain on risk trends and the direction of capital flows. As such, Monday’s February Singapore CPI report may pass without much fireworks. The same could be said for Malaysian CPI on Wednesday. Do keep an eye on Singapore industrial production on Thursday which may further reveal how local conditions are coping with the coronavirus.