The haven-linked US Dollar gyrated at the onset of this week’s session after the Federal Reserve unexpectedly slashed interest rates by 100-bp to a 0.00% - 0.25% range. Quantitative easing was also launched in the central bank’s second inter-meeting announcement this year after the coronavirus outbreak threatened global growth. This announcement also replaces the originally-planned FOMC meeting on Wednesday.

With monetary policy pushing its limits, the Greenback’s yield eroded and Chair Jerome Powell seemingly against negative rates, further risk aversion in markets may offer some upside momentum to the world’s reserve currency. This is after the Dollar saw immediate losses against ASEAN currencies such as the Singapore Dollar and Malaysian Ringgit at market open. What can be in store in the week ahead?

Over the past 5 trading days, the US Dollar soared against most of its counterparts, including ASEAN currencies such as the Singapore Dollar, Philippine Peso, Indonesian Rupiah and Malaysian Ringgit. After the markets aggressively priced in easing from the Federal Reserve amid the coronavirus outbreak, the Greenback began benefiting in its status as the world’s reserve currency. In other words, they mostly ran out of room to further price in easing – as expected. 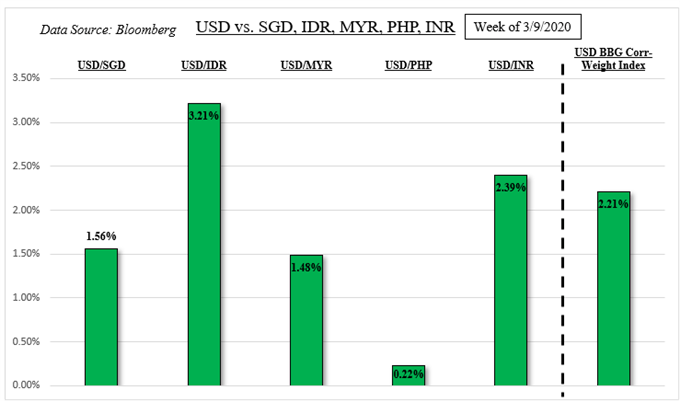 Fears of a global recession continued brewing as coronavirus cases spread outside of China in countries such as Italy and the United States. At the end of last week, President Donald Trump declared the pandemic a national emergency. By that point a lot of damage had been done to not just local markets, but to those in the Asia Pacific region as well.

On the next chart below, equities in Singapore, Indonesia, Malaysia and the Philippines have reached bear market territory – declines greater than 20% from the last peak. The FTSE Bursa Malaysia KLCI index touched its lowest since 2011. The Philippine Stock Exchange PSEi aimed for its lowest since 2012. Singapore markets experienced their worst single-day decline since 2008.

As for the rise in USD/SGD, USD/PHP, USD/IDR and USD/MYR, look no further than the direction of emerging market capital. The chart below shows the MSCI Emerging Markets Index (EEM) falling in tandem with a regional capital flow proxy index. This is as the price of U.S. government bonds climbed, reflecting higher demand for safety.

US Treasuries – and by extension the US Dollar - are ubiquitous for their “anti-risk” status. In other words, traders believe that the probability that the US government defaults on debt obligations is near zero. When market panic strikes, investors often flock into bonds as the focus shifts to preserving capital and away from generating a return. With that in mind, there could be scope for the Greenback to continue climbing. 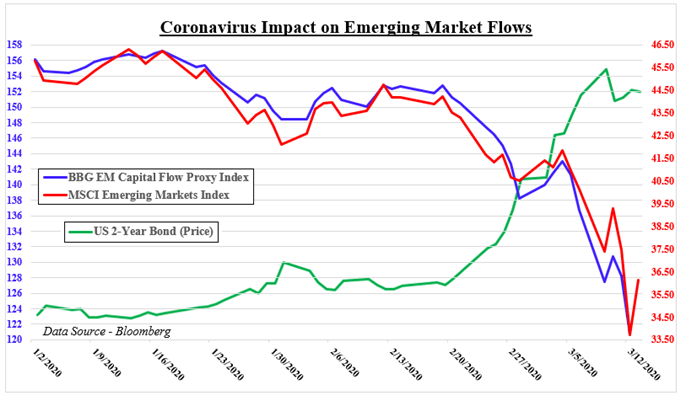 The focus next week for general market mood and sentiment will likely continue to be on spreading cases of COVID-19 in the United States as it is the world’s largest economy. University of Michigan consumer sentiment fell to its lowest since October according to preliminary estimates from March. While that was slightly better than expected, more signs of hesitant shoppers would place growth at risk.

About two-thirds of GDP is in consumption. States and counties are taking measures to deter or ban large gatherings with certain school districts shutting down altogether. Apple Inc announced closing down retail shops outside of China.

The longer this persists and the more stringent the policy measures that come ahead, the more growth could slow. Over the weekend, Spain declared a national emergency as France took swift measures to shut down cafes and restaurants. These policy prescriptions could slow the coronavirus’ spread and limit the economic downturn.

That is why all eyes in the week ahead are on the U.S. fiscal response. House Democrats and President Donald Trump were able to agree on a coronavirus relief package last week. However, the Senate was off for a 3-day weekend which would mean the bill could be implemented come Monday. That may offer some relief for markets, perhaps stalling upside US Dollar momentum in the near term.

This is as China will release industrial production, retail sales and unemployment data for February as the week begins. This is for the same month that gauges of business activity dropped off a cliff. Softer-than-expected data risks souring sentiment, perhaps resuming the selloff in ASEAN equities. That may push pairs like USD/IDR, USD/PHP, USD/MYR and USD/SGD higher.

Indonesia will also release February’s trade report before the Bank of Indonesia likely cuts rates for a second time in a row on Thursday. On that same day, the Philippine central bank (Bangko Sentral ng Pilipinas) is anticipated to follow suit. If you are interested in technical analysis, check out my ASEAN report where I touched on upside breakouts in the US Dollar.