Hong Kong’s benchmark stock index - the Hang Seng - could struggle to find meaningful upside momentum should trade tensions between the United States and China sour amid the coronavirus outbreak. That could in-turn offer the anti-risk Japanese Yen momentum against some of its major peers such as the US Dollar, Australian Dollar, British Pound and Euro.

On the chart below, the Hang Seng index can be seen gradually following a deterioration in local growth which has been closely aligning with the downward trajectory of global manufacturing PMI since 2018. As a result, the financial hub of Asia is poised to see GDP shrink -8.9% y/y in the first quarter. That is the worst decline on record and closely follows what economies have been experiencing across the globe.

China is by far Hong Kong’s largest trading partner - about 55.3% of local exports traveled to the world’s second-largest economy last year. While China has been appearing to recover somewhat nimbly from the pandemic, an escalation in trade tensions with the US could bring back the economic consequences of tariffs the world saw in the lead up to the outbreak.

US President Donald Trump has made clear his disdain for China’s handling of the coronavirus. While there has been some back and forth in brief talks between officials, Trump expressed his hesitation to talk with China’s President Xi Jinping over the past 24 hours. This is as the White House is ‘looking at’ Chinese companies trading on the New York Stock Exchange. 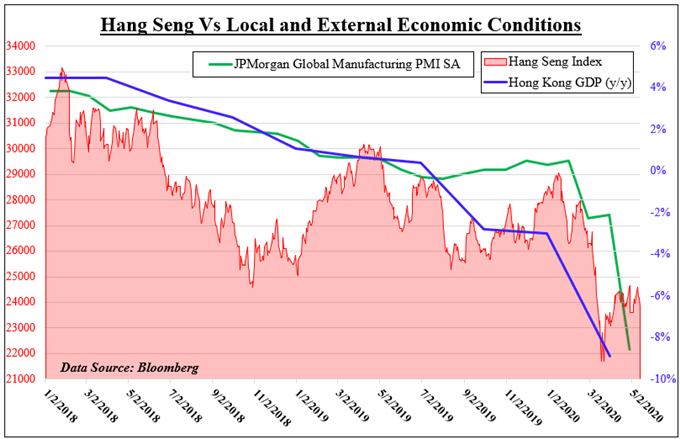 Since 2018 – when the Hang Seng topped – my majors-based Japanese index can be seen gradually appreciating. The index averages the Yen’s performance against some of its major counterparts such as the US Dollar, Australian Dollar, British Pound and Euro. If the Hang Seng sees selling pressure resume course, which may also follow a global deterioration in market mood, then the JPY could see gains pick up pace.

Recommended by Daniel Dubrovsky
What is the road ahead for the Japanese Yen?
Get My Guide 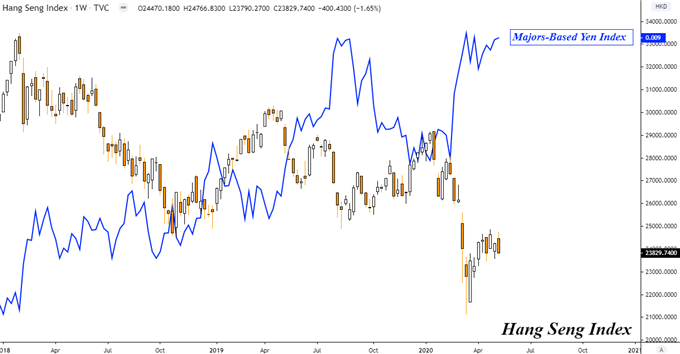 On the daily chart, the Hang Seng recently adhered to the falling trend line from the beginning of 2020. This follows a rejection of resistance which seems to be a range established between 24657 to 24899. That has placed the focus on immediate support at 23483. A break under the latter could open the door to revisiting March’s bottom. The latter also closely aligns with lows from December 2016. 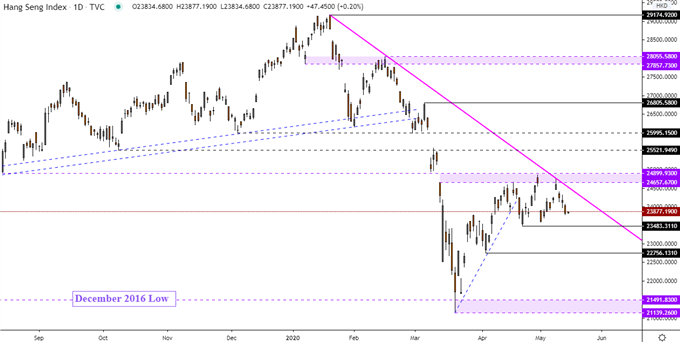