While the US Dollar underperformed against an average of its major counterparts this past week, it continued to aim higher versus some of its ASEAN and Southeast Asian counterparts. Fed Chair Jerome Powell reinforced anticipation of another 25-basis point rate cut in September at a speech during the central bank’s annual economic policy symposium at Jackson Hole. Local government bond yields fell.

The resurgence in volatility during the same day as US-China trade war tensions heated up likely helped the Greenback outperform the Philippine Peso, Malaysian Ringgit, Singapore Dollar and Indian Rupee. Accompanying their decline was a drop in the MSCI Emerging Markets Index as capital was diverted out of developing economies and into the safety of US Treasuries.

One currency that managed to hold its ground was the Indonesian Rupiah even though its central bank joined the spree of surprise easing seen throughout the world. Commitment to stabilize the IDR may have kept it from selling off. Meanwhile, the Singapore Dollar was pressured after a set of dismal local inflation data. Core Singapore CPI clocked in at 0.8% y/y versus 1.0% expected, the softest pace since March 2016. 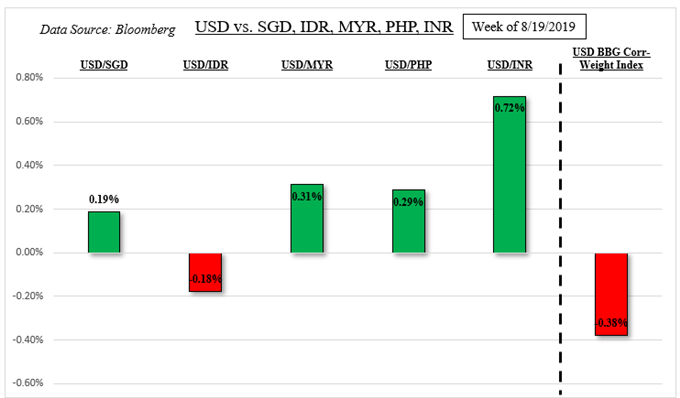 In response to the US getting ready to impose some of the extra $300b tariffs against China in September, the latter outlined plans for about $75b in retaliatory levies. Then in mid-December, when Donald Trump is expected to impose the remainder of the $300b in tariffs, Xi Jinping is anticipated to resume 25% auto tariffs against the world’s-largest economy.

Unsurprisingly, Mr Trump announced countermeasures amid threats from China to retaliate. After market close on Friday, the US President said that the currently implemented $250b in Chinese tariffs will be raised to a 30% rate from 25% on October 1. On top of this, the extra $300b in levies will be raised to a 15% tariff instead of the originally-designated 10% rate.

Continued uncertainty about the future of trade wars as global growth slows has led central banks from Malaysia, the Philippines, Indonesia and India to cut benchmark lending rates. With such tensions seeming unlikely to be resolved in the near-term, further action from them to support growth could be a possibility that weighs against MYR, PHP, IDR, INR and SGD as capital risks fleeing emerging markets.

Will the US Economy Continue its Relative Outperformance?

With China’s economy chugging along at its slowest pace in over 30 years, signs of weakening growth from the United States (which is outperforming its developed counterparts) could exacerbate worries about the health and vigor of the world economy. For that, all eyes are on local data next week such as durable goods orders and the next update of second-quarter GDP. US recession fears have been on the rise.

While the Greenback could see some selling pressure against its major counterparts, its haven-linked status coupled with the heightened risk of emerging market capital flight gives it an upper hand against its ASEAN peers. We will also receive Indian GDP which is expected to slow to 5.6% y/y in the second quarter from 5.8% prior which may sink INR. These rates of expansion were last seen in Q1 2014, over 5 years ago.